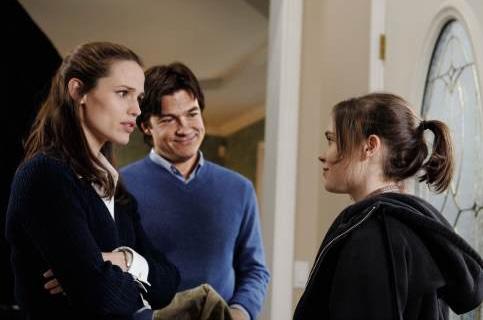 To the set record straight, I kinda liked Juno, but could have easily never seen this movie. It didn’t do much for me or my life. It had about as much relevance to me as any other comedy written by a 30 year old (Diablo Cody (??)) who still thinks “Hey…I am down with teens. That’s how they talk!” Nah. I have never in my entire life came across a girl who at 16, had her words so down right scripted- to- be- witty, that it came off as genuine wit. It didn’t. No 15 year old, no matter how ahead of her time she is, talks like that. Sorry Juno…the expression “1 in a million” doesn’t always apply to reality.

But, Juno isn’t all bad. It has some genuine moments of charm, due to the performance of its young star Ellen Page. I do think she has talent, but young actors like her frustrate me. You see, they are far ahead of their age and it’s difficult for them to play charactors their own age. They try to play them with some type of innocent flair, that just doesn’t work. It was the same with her groundbreaking role in “Hard Candy”. She was pretty much playing Juno in that movie as well, only a more evil and twisted Juno bent on revenge. But what lost me in Hard Candy loses me here. Hard Candy would have been more believable if Ellen Page had been playing a girl who was really 27, but who just looked 15. I remember thinking to myself, no real 15 year old talks like that. And that’s exactly how I felt with Juno. “Well, I’m already pregnant, so what other shenanigans could I get myself into?” I dunno…just doesn’t come off as teen-agey enough to me. But…me thinks Ellen Page has a long and bright career ahead of her.

As I ramble on, I just want to point out that Juno is a fun little movie about the love of something you don’t know if you love yet. It has a nice message and is pretty simple to get into…but on the same note, it’s pretty simple to forget as well. I do think that Jason Reitman (whom I will always know as the little a-hole kid from Ghostbusters 2 telling Dan Akyroyd “My Dad says that you guys are full of crap.”) is an okay director. Between this and his other film “Thank You For Smoking”, I would say he is at ball 2. Sure, two more films like this would allow you to take 1st base…but did you really earn it?

But, of all the other crap that Hollywood has spewed out in 2007, I would crack a secret smile to see Juno do decently at the Academy Awards because, even though I find this particular film a little flawed, I do think all involved have a pretty good future ahead of them. Now if Ellen Page would just play someone more her mouth’s age, we would be just fine. -Ben