Skip to content
home Feature Feature: Why So Serious? A Study of On-line Film Promotion 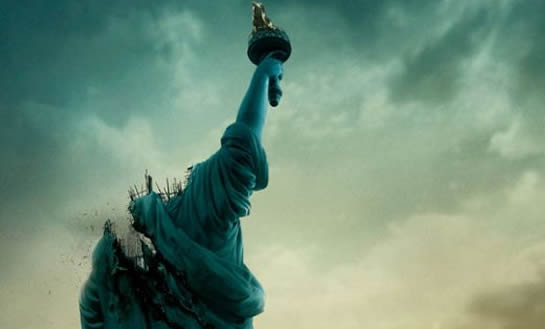 Tomorrow, all will be explained and the wait will be worthwhile. At least, that’s what fans of JJ Abrams and his latest movie, ‘Cloverfield,’ are hoping. (All indicators and early reviews seem to point to the fact that they’ll get what they want.)

‘Cloverfield’ is the latest in a string of movies adopting alternative methods of promotion, often starting months before a film actually opens. Is it worth the trouble? Does the promotion build hype for the movie, or is it just a distraction from the important goals of a film, that is, to excite, educate and enthrall moviegoers?

‘The Blair Witch Project,’ was one of the first movies to build a name for itself by way of on-line advertising. A web-site was designed to put forth the theory that the film was indeed found footage, real events with real people. I remember the summer of 1999, where it seems almost everyone was caught up in the ‘is it real or not’ talk. And seemingly everyone knew of someone who had a friend who knew one of the kids in the movie and it definitely happened.

Another of the earliest on-line promotions was Steven Spielberg’s ‘A.I.’. The film was Spielberg’s tribute to his friend, the late Stanley Kubrick, who was planning on making ‘A.I.’ his next film. (Or at the very least, Kubrick would have served as producer with Spielberg working behind the camera.)

The search began after the name Jeanine Salla appeared in the credits of the ‘A.I.’ trailer as ‘Setient machine therapist.’ A Google search of her name brought up a bunch of sites, including Bangalore World University and a web-site supposedly created by a family with the last name of Chan.

Meanwhile, on the back of the ‘A.I.’ one sheet, certain letters were circled, spelling out ‘Evan Chan was murdered’ and ‘Jeanine was the key.’ What did this all mean. A phone number was eventually found, and when called, a cryptic message was heard.

Cloudmakers.org was set-up to help fans unravel the mystery. Since the film has opened, the site has remained open, as a archive of the information discovered as well as site dedicated to on-line gaming.

Did the buzz help the movie? In the long term, no. While it perhaps sparked an initial conversation about the film, once it opened, viewers were split on whether or not it was worth the trouble.

New Line’s ‘Snakes on a Plane’ sought to bring in viewers and create a buzz by asking fans to be a part of the movie. Fans were encouraged to record songs about snakes being on planes and to make short films about snakes and planes. The producers even went back and shot the now famous Oedipal line about snakes on an Oedipal plane. 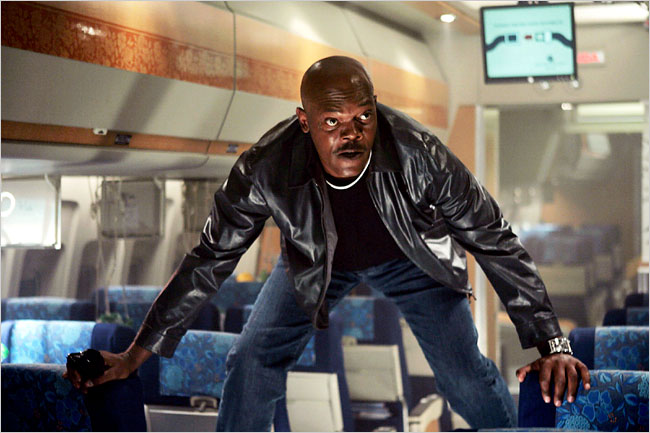 The buzz was short lived, however, once fans got a look at the film. Or maybe it’s better to say once they didn’t. For all the talk about how excited everyone was about a film whose whole pitch was in its title, not many actually bought tickets to see these particular snakes on this particular plane.

And that brings us to the current crop of internet movie promotions.

Why So Serious.com claims to be the web-site of the Joker, where those who check out the site are recruited to be his minions in whatever dastardly plan he has worked up for Batman this time out.

The site has seen several changes over the past few months. During October, the site only showed a pumpkin with a candle burning in it. As the days to Halloween grew closer, the candle melted and the face on the pumpkin also started to droop, resembling more and more the familiar logo of everyone’s favorite caped crusader.

The days after Halloween turned into a scavenger hunt, with a ransom note taped down to the home page, and clues for a variety of cities across the US, fans needed to find the location that the Joker described and photograph a letter that he referenced in his clue. Each correct answer would warrant that part of the note being visible. Within hours, the note was fully uncovered, reading, ‘The only sensible way to live in this world is without rules.’ This then opened a link to one of the first pictures of Heath Ledger in the Joker make-up.

The site has been quiet since then, but will no doubt awaken as the release date to ‘The Dark Knight’ grows closer.

The final, and most recent example is JJ Abrams’ ‘Cloverfield.’ Abrams produced the film, while Matt Reeves directed and Drew Goddard wrote the script. The film is about a large Godzilla-like monster attacking New York, with the film being comprised of found-footage shot by people during the attack.

The first whiff of the film that fans got was a teaser trailer that was packaged with Michael Bay’s ‘Transformers.’ The trailer gave little info or insight to fans, who were prompted to start searching around the internet.. Several sites were found and deemed to be part of the mystery, but Abrams quickly denounced the sites, saying that only 1-18-08.com was the only site tied to the film. Abrams did say that several sites were in production to tie into the film.

Since that time, fans have discovered numerous sites tied to the production. Cloverfield Clues is an excellent link to spoiler-free coverage of the ‘Cloverfield’ phenomenon.

So does it help a movie at all to have these web-site tie ins? The answer isn’t a simple one.

For every ‘Blair Witch,’ which heightened the expectations and made the film come alive for those on-line, there’s Snakes on a Plane, which was quickly overcome by its own hype. Will ‘Cloverfield’ and ‘The Dark Knight’ out-live their on-line marketing? Only time will tell. Hopefully the movies will be more memorable than their web-sites. – Sam