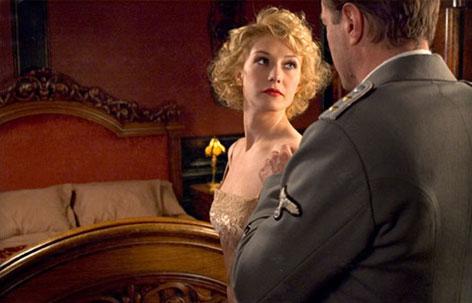 After the critical drubbing of ‘Showgirls,’ ‘Starship Troopers,’ and ‘Hollow Man,’ in the US, director Paul Verhoven returned to the Netherlands to change his career dramatically. The result was a re-uniting with screenwriter Gerard Soetman and the movie ‘Black Book.’

The story is about Rachel, a Jewish girl living in hiding in the Netherlands during World War II. After a US plane accidentally bombs the farmhouse she’s been living in, she takes off on the run, trying to evade Nazi capture while working with the resistance. She seduces a Garman officer to gain entrance into regional Gestapo headquarters, but ends up falling in love with him. The film then twists and turns as the Allies roll into town and everyone’s allegiances are thrown into question.

‘Black Book’ is a fast-moving story, and if you can accuse it of anything, it’s of not taking time to explain things clearly. While the pertinent details are always covered, one is sometimes left waiting 10 minutes for explanation of something that just happened. The direction is top notch and Verhoven weaves a fascinating, taut thriller out of the material. The photography and set decoration also do a wonderful job of evoking the period, and focusing on an area of the war that hasn’t been covered to death in cinema.

Carice van Houten stars and is excellent as Rachel (or Ellis, the name the resistance gives her papers for) and, given the fact that she’s in almost every scene, the film hangs on her performance. She also does a good job handling some of the more ridiculous Verhoven-esque moments that are in the film. (I’ll only say that one scene involves dying all her hair blond, while another involves a large vat filled with excrement. You can accuse Verhoven of many things, subtlety is not one of them.) Sebastian Koch is excellent as Muntze, the German officer she seduces, while Wildemar Kobus does a wonderful job of making a Nazi officer both intimidating and loutish at the same time.

However, the actors and director eventually find themselves betrayed by the script. While any action movie requires zig-zags and double agents, ‘Black Book’ has everybody in bed with everyone else, ending up a confused, muddled mess that has you asking simple questions about character motivations after the film is finished.

The first hour and a half are an excellent build-up, but, the film then starts taking hard right turn after hard right turn, and the viewer’s head is left spinning. Verhoven is a skilled director and he creates suspense from small moments, and small details. Yet the screenplay takes any of the challenge out of his hands and flies to all corners in an effort not to be boring. It’s a shame. The acting and direction are too skilled to be boring.

Verhoven is to be credited for redeeming himself and going back to solid, quality action filmmaking. However, it’s a shame to see all his hard work betrayed by a script that is doggedly determined to loose its audience. – Sam