I am sorry. For the past couple of days, I’ve been planning to write an article about the nominations, which you announced this morning. I was going to call it ‘You Got Screwed,’ and talk about all the different movies and people who should have been nominated and weren’t. I thought it was a funny title. I was wrong to assume that you would have shafted some people. Hey, it’s only natural. There are so many movies and only so many nominees. I get it. (Plus, you always seem to do it every single year.) However, I was pleasantly surprised to see that you, for the most part, got it right this year.

Good job on nominating both ‘No Country For Old Men,’ and ‘There Will Be Blood,’ for so many awards. Both are powerful and unblinking movies that force the viewer to deal with some stuff that they probably don’t want to. Hell, I saw ‘Blood,’ two weeks ago, and I’m still trying to figure out how to describe what I felt about it. A movie that does that is worthy of singling out.

Also, good job with Viggo Mortensen. If you ask me, not enough people are nominated for awards after wrestling naked in the shower with dudes. And on the actress side, Julie Christie and Laura Linney? It’s impressive that you got both of those right. The less said about Cate Blanchett in that ‘Elizabeth’ movie the better, but, hey, you tried, right? 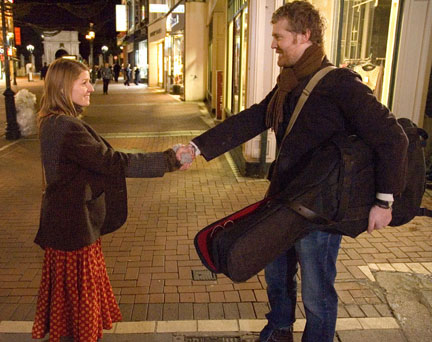 Thanks also for nominating Glen Hansard and Marketa Irglova for the song ‘Falling Slowly’ from ‘Once.’ I loved the movie and was afraid that you guys would ignore it for every nomination, so, it was a relief to see that you guys didn’t forget.

I’m a little confused by Philip Seymour Hoffman for ‘Charlie Wilson’s War,’ since, by all the stuff I’ve read, the performance he should be remembered for this year was ‘The Savages.’ But you had five in the Best Actor race, so, maybe this is your way of making sure Phil has to get a haircut before the big ceremony.

I know there’s a lot of buzz over the fact that ‘4 Months, 3 Weeks and 2 Days,’ didn’t even make the short-list of films in consideration for Best Foreign Film and I’d recommend you look into that.

Sure, there’s stuff I’m a little upset about, stuff you ignored that you shouldn’t have, but nobody’s perfect. I would have loved to see ‘Zodiac,’ get some recognition. I thought it was hands down, one of the best films of the year and it kind of got lost. You guys pointing it out would have raised its profile a little, which would have been nice. I’m also a little upset that you ignored Bob Dylan for his song from ‘Lucky You.’ Sure, the movie wasn’t Oscar-caliber, but I think you could argue that ‘Huck’s Tune,’ is on-par with his recent work which, almost everyone seems to agree, is amazing.

But, you know, you win some, you loose some. Overall, bravo, Academy. Good job. Now I just hope there’s an actual ceremony for all the awards to be handed out at.  It’d be a shame that the one year you guys don’t drop the ball there is no ceremony.