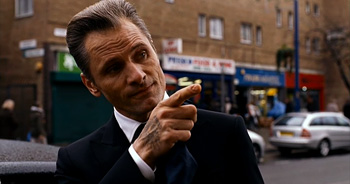 Bob Dylan once said that ‘to live outside the law, you must be honest.’  And so it is with David Cronenberg’s most recent movie, ‘Eastern Promises.’

The film stars Naomi Watts as Anna a nurse in the maternity ward in London’s hospitals.  When a 14 year-old Russian heroin addict turns up and give birth to a baby just before dying, Anna turns to a diary the girl was carrying with her to find the baby’s family.

Her attempt to have the diary translated leads her to a Russian restaurant/club run by Semon (Armin Mueller-Stahl) with assistance from his son, Kirill, played by Vincent Cassel.  Their driver is Nikolai played by Viggo Mortensen.  They are also mobsters.

Semon quickly realizes that the diary is incredibly damaging, and tries to stop Anna from learning its contents, while Nikolai shows a softer side, almost befriending Anna while still earning his stars from the mob.

‘Eastern Promises’ is Cronenberg’s second film with Mortensen and like with ‘A History of Violence,’ the paring results in an excellent film.  In ‘Violence,’ Mortensen was the center spoke to a wheel of interesting characters and here Cronenberg lets him loose, on an interesting and almost silent character.  Much like the Dylan quote above, Mortensen’s Nikolai knows that being in a gang is no reason to not do the right thing.

The story is Nikolai and Mortensen dives in, full-force.  With strong performances across the board, (Mueller-Stahl and Cassel especially,) ‘Eastern Promises’ is easily one of the best movies of 2007.

Cronenberg’s direction is never flashy and serves the material incredibly well.  Much like in ‘Violence,’ he lays back and lets the actors shine, at the same time, keeping things moving at a solid pace.  He’s always had a propensity for horrific images, and yet this time, his focus is on the weathered, aged faces that populate the story.

Much has been made of Mortensen’s fully-nude, steam bath attempted murder/wrestling scene and, yes it’s very well directed and acted and kudos for Mortensen for giving himself wholly to the scene.  (While I enjoyed what they were doing, I could do with seeing less of ‘little Aragon.’)

‘Eastern Promises’ is a slow-burn of a story, never overwhelming you with intensity or flash, but it is precisely these elements that make it such a rewarding movie. –Sam