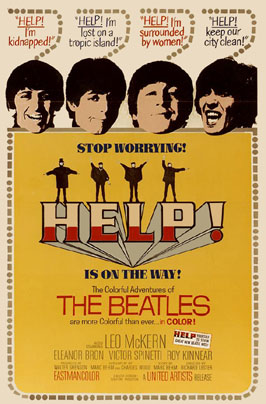 Ringo has a ring. A cult wants the ring. And for an hour and a half, the cult tries to get it off of Ringo’s finger, where the ring has been stuck.

That is the plot of Richard Lester’s ‘Help!,’ the follow-up to ‘A Hard Day’s Night’ and the last of the Beatles acting career together. And really, that’s about all the plot this movie can stand. The rest of the running time is spent with music and puns as the Beatles toy with their boy-band image.

The film is a hip, mod, and fast-moving… and it needs to be. If you stop to consider the story at all, you’ll be confused at best and bored at worst.

Lester has jammed the movie with quirky, British humor. Why do the Beatles have a vending machine in their apartment? Is putting Ringo in a tiger’s cage really the best way to catch him? I don’t know or care, and neither does the movie.

The film is a time capsule, a look at The Beatles just before they quit touring and began writing more complex, intelligent music in the studio. It features the last we’d see of the funny, punny Beatles. The next time they’d appear on the screen would be in animated form with ‘Yellow Submarine.’ (Their next live-action appearance would be the inside-look, albeit depressing ‘Let It Be.’) ‘Help!’ offers a ton of great Beatle music, ‘Ticket to Ride,’ ‘You’re Gonna Loose That Girl,’ the title track and more.

The movie is different than ‘A Hard Day’s Night,’ and pales in comparison. (Which, when you really consider it, almost any rock movie would pale in comparison.) Is ‘Help!’ a great movie? No. Is it worth seeing as a time capsule, or if you’re a Beatles fan? Of course.