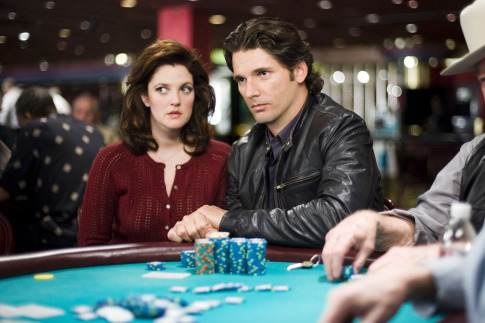 Shot in 2005, scheduled for release in 2006, finally released in 2007, ‘Lucky You,’ had a rough path to travel before making it before audiences. Ultimately it opened the same weekend as ‘Spiderman 3,’ and, well, only one of these two movies set box-office records.

Eric Bana stars as Huck Cheever, a down-and-out poker player, living in an unfurnished house with an empty swimming pool in the back. He’s a good player, but can never logic dictate the way he plays, which often puts him into showdowns both at and away from the table that he probably should avoid.

The root of all this angst is his father, three-time World Series of Poker player, LC Cheever, played by Robert Duvall. LC is enjoying his life, and is trying to teach Huck that sometimes it’s okay to play it safe.

That, in a nutshell, is the plot of ‘Lucky You.’ There’s also a romantic storyline with Drew Barrymore, but it isn’t the focus of the movie, despite what the posters and commercials told you.

And that’s all right. Co-written and directed by Curtis Hanson, (‘L.A. Confidential,’ ‘Wonder Boys,’ ‘In Her Shoes,’) ‘Lucky You’ is a solid addition to his already impressive cannon. ‘Wait,’ I can hear you thinking, ‘you actually liked this movie?’ And let’s get this out of the way; yes I did.

It’s not perfect and if I had to shell out $9 to see it in a theater I might have been longing instead for a certain web-slinger, but, on DVD, this movie shines. It flows like a river, crooked and meandering. Not a perfect film by a long stretch, but a film so interested in its characters, Hanson is able to overcome whatever triteness there is in the storyline.

Filled with cameos from real professional poker players, this film focuses on the side of Las Vegas that isn’t usually shown in movies. The boring side. All these people do, all day, is sit inside windowless rooms and play cards. Is that interesting? For a little while. Does it grow tiresome? Of course.

And that’s what I liked about ‘Lucky You.’ It takes its time. So many movies seem to zip around and race from place to place with no real time spent on the characters. In this film, like his others, Hanson is so genuinely interested in his characters, that everything else becomes a distraction. For many people, it’s a large distraction. For those willing to sit down, give up a few hours and surrender themselves to the feel the pace of ‘Lucky You,’ it’s a perfect DVD movie. -Sam