How terrible an act will someone commit if they know that their happiness lies on the other side of the deed? How does someone handle the guilt of knowing their actions hurt others? These are questions that come out of Woody Allen’s new movie, ‘Cassandra’s Dream.’

Colin Farrell and Ewan McGregor star as Terry and Ian, two brothers who grew up and live in South London. Terry (Farrell) is a car mechanic by day and a gambler the rest of the time. Whether it’s dogs or poker, Terry is game. He eeks out a living, has a long-term girlfriend who loves him, but he’s always chasing that one big score that will set everything right. Ian (McGregor) works as a manager at his father’s failing restaurant. He’s not really happy there and he dreams of becoming a true businessman, investing in a series of hotels in California. He is unable to afford the lifestyle he’d like to live in, so he’s always borrowing the nicer cars that Terry is fixing up when he goes out on dates. 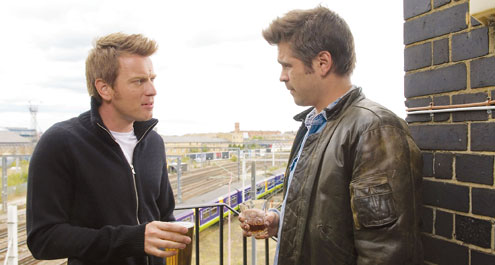 They have a much talked-about uncle, Howard, (played by the excellent Tom Wilkinson) who is a successful businessman and travels all over the world. It is his money that has helped keep Terry and Ian’s parents afloat during the tougher times.

When Howard is in town for his sister’s (and Terry and Ian’s mother) birthday, the two brothers lay their various dreams before their uncle. Terry wants to ditch the auto mechanic business and open a sporting goods shop. Ian, who has now found a steady girlfriend who’s an actress, wants to move to LA, put the money down on the hotels and watch his girlfriend shoot to superstardom. Howard says that he can help the boys but he needs a favor as well. An old business partner is blabbing to the authorities about some of Howard’s dealings. The only way to get him to shut up and continue on successfully without serving jail time is to kill him. Howard makes the boys an offer; they do his killing, he’ll make their dreams come true.

The two debate about it for some time, weighing the pros and cons, the right way to go about it to ensure they won’t get caught and whether what they want is worth a human life.

After the act is carried out, the brothers deal with the fallout in their own way.

Allen creates a tension with the story and you feel for the characters as they make decisions that will affect every decision thereafter. Philip Glass provides the score, one of Allen’s few times he’s worked with original music, and the effect is entrancing and evokes paranoia with its repetitive motifs.

All of this said, it’s not a fast-moving story, and sometimes you find yourself wishing they’d just get on with it. But the act of murder requires careful planning and consideration, which this film excels in.

In the opening scene of the film, the boys scrape together the money to buy a boat. They name it ‘Cassandra’s Dream.’ It is on the boat that they both truly feel free and throughout the movie, they long to return to the water, to feel the way they felt on the ‘Cassandra.’ Of course, it is just a dream and they come crashing back to reality. No one can escape their problems forever. –Sam

One thought on “Review: Cassandra’s Dream”