Skip to content
home Feature A Bunch of Bava: The Girl Who Knew Too Much

In 1962 Mario Bava made the fourth film on which he would be credited as director. In ‘The Girl Who Knew Too Much,’ Bava played with humor, suspense and outright terror in a way that some critics cite as the first true Giallo movie.

Nora is an American girl, traveling to Rome to stay with her aunt. Upon arriving, (and after a strange altercation at the airport where her seat-mate is arrested in front of her for smuggling marijuana in cigarette cartons,) Nora finds her aunt Adele very sick. She meets Dr. Bassi, (played by American actor John Saxon, best known for his roles in ‘Enter the Dragon,’ and ‘A Nightmare on Elm Street,’) who instructs her how to take care of her aunt. However, as she’s getting ready for bed, aunt Adele cries out and very quickly dies. Shocked, Adele wanders out into the street, looking for anyone to help her. The shock of her aunt’s death soon turns to shock of a different kind as she is witness to a murder on Rome’s famous Spanish steps. She passes out. 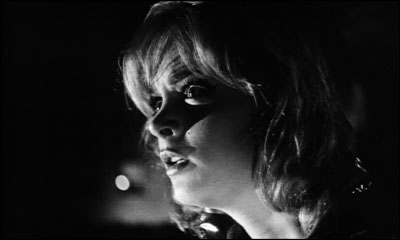 The next morning when a police officer helps revive her, she recounts the murder she witnessed. The policeman is interested, but quickly informs her that she’s describing a murder that occurred years ago. Still confused, Nora meets a neighbor and friend of Adele’s, Laura Craven-Tierani. Laura tells her that her husband works out of the country and that she travels to be with him often and their house is usually empty. She offers it to Nora as a place to stay.

Bava spends much of the film revealing the final frame to the audience only after confusing us. A strange shot of white is revealed to be the top of three nun’s habits. His establishing or concluding shots on many scenes pan over at the last second, revealing new information that the audience was previously unaware of. Nora is being followed. However, Bava only reveals this information at the end of the shot, first lulling the audience into a sense of calm and understanding of the scene and then putting it on its head with a quick camera move.

‘The Girl Who Knew Too Much’ is also not without humor. In fact, there are several repeating jokes and scenarios. On her first night staying at Laura’s house, Nora is scared by the strange surroundings. So, recalling what she read in one of her favorite mystery novels, (a tip to the Giallo paperbacks, perhaps?) she dumps talcum power on the floor to trip up any attempted assaulter and creates elaborate trip-wires and alarm systems. Of course, it will all be for not and Dr. Bassi will be the one caught. But the reveal of it is done in a surprising way, with the audience almost forgetting that all this crazy string is all over the room, so when Dr. Bassi fals, it’s a surprise. Bava also has Dr. Bassi break his finger early on, and derives a lot of humor from him always banging the damaged digit on things and then wincing in pain.

However, the film is not all played for laughs and Bava does an excellent job of building the tension throughout the film and the last few minutes are especially tense.This was Bava’s final black and white film and in a way it’s a shame, because he, along with his assistants, do such a good job painting with the darks and lights. Its most definitely a noir film and one wonders what else Bava could have cooked up.

‘The Girl Who Knew Too Much,’ is an important film in Bava’s career, but it lacks some of the Bava touches and one gets the feeling that Bava is only just beginning to show all that he is capable of. -Sam