Skip to content
home Reviews DVD Review: The King of Kong: A Fistful of Quarters 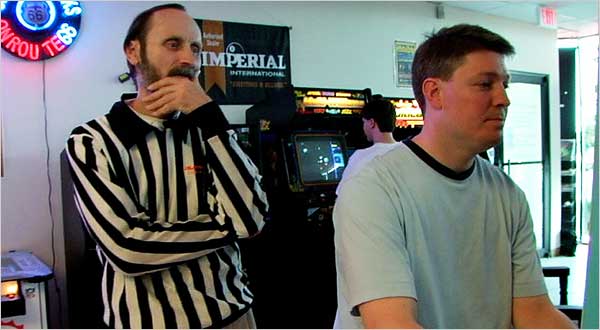 Watching Steve Wiebe pursue the elusive Billy Mitchell and the boon of the highest Donkey Kong score in, ‘The King of Kong: A Fistful of Quarters,’ is surprisingly similar to watching Mario move his way through the barrel and ladder-laden levels in pursuit of the ever moving Donkey Kong and the princess: you want both Mario and Steve to succeed, but the game they’re playing is seemingly never ending. In Steve Wiebe the filmmakers couldn’t have found a better underdog for the audience to relate to and root for. The everyman from Anytown, USA, Steve Wiebe was laid off from his job at Boeing and found solace, and eventually a purpose, in perfecting his Donkey Kong game. Realizing that he has chance at breaking the record for the highest recorded score in Donkey Kong, Steve Wiebe, his family and this documentary set off for a chance to face the reigning champion, Billy Mitchell.

Ah, Billy Mitchell. The perfect villain to Wiebe’s humble hero. Self-confident to the point of cocky and cartoonish in his appearance (note the hair and his attire), Mitchell exudes an air about himself that you either think is cool or you’re annoyed by and wonder why he thinks he has earned this cavalier attitude that all but says he’s a step above the rest of us. When Wiebe arrives to Mitchell’s home town and creates a buzz that he could potentially beat Mitchell’s record at the local arcade, we get a glimpse at the source of Billy Mitchell’s power: the title as The King of Kong.

The film unfolds from this point on as the pursuit of this coveted title. One wants it as a chance to rise above his status as the little man and prove that he is special to himself and his family, the other seems scared to face a very real chance at losing the title that he needs in order to maintain his status and hold onto the glory as the reigning king of the classic gaming realm. And make no mistake, this world where classic gaming rules does exist. While Mitchell avoids competing directly with Wiebe, we are introduced to an eclectic cast of characters in this world of what are probably now considered antique arcade games. From champions in specific games to those who will probably never achieve greatness and have become lackeys to those who have, we get to see this very real culture as turmoil enters in the form of Wiebe. Alliances are fortified or questioned and in this, the spirit of the film shines. This is a movie about people who want to be known for something special, not necessarily Donkey Kong, but something, and the challenges to achieve it. Drama typically calls for someone to see adversity then face themselves to overcome it. And in that respect, I’ll argue that while Steve Wiebe is clearly the hero of the movie, his change isn’t nearly as radical that of the supporting character, Walter Day. Watch as this man, who seems to have an undercurrent of sadness, stand in the middle of the Wiebe/Mitchell chaos and have to rise above the cult of personality that is Billy Mitchell, and all that he and his scores represent, to defend the rules of the classic gaming world that he created.

The King of Kong quickly pulls you in and in looking back; I was surprised to see how quickly it does so. I was impressed with the ease of which I was emotionally invested in these characters and how much I wanted to see Steve Wiebe take the title. The stigma of being a video game “nerd” that has clearly attached itself to these characters can easily be attached to this documentary, possibly causing people to write-off watching it as a silly movie about Donkey Kong. But as the first 20 minutes of the movie shows, this isn’t about video games; it’s an incredibly good film about people and their desire to be special. And I’ll argue that if you take away the medium that these people are battling on, their rivalry is no sillier than that of Yankee-Red Sox fans. Maybe ‘The King of Kong’ will help show that classic gamers can rise above the status of little man and show that their accomplishments deserve to be special, too.