Before I delve into the movie, let me preface this review by giving you my history with The Simpsons. I vividly remember hearing about this new show that was amoral, a show whose t-shirts were banned from schools, a show that had parents up in arms at its seeming lack of family values and a show that all the kids in my class were excitedly buzzing over. I was 10 years old when The Simpsons debuted in 1989 and by the time I sat down to watch my first episode under the leery eye of my mother, I remember feeling this was something big. From that point on, I was hooked. As the seasons progressed, the Sunday blues that came with the weekend’s end were momentarily forgotten from 8 to 8:30 as new episodes crossed the airwaves onto my tiny TV. And during the 167.5 hours a week that a new episode wasn’t playing I was going through taped episodes that my brother had made using the crude, lo-fi TV-to-VCR format he had available. In fact, it’s probably not a stretch to think that some of my film obsession and my approach to watching movies stemmed from this way of getting my Simpsons fix. 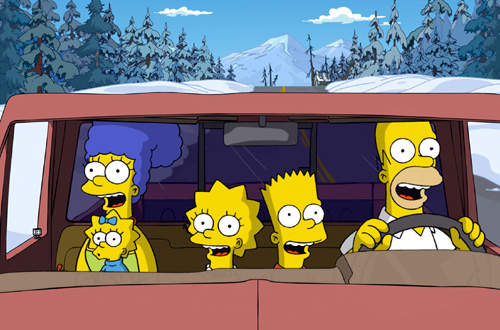 So I loved, continue to love and will probably always love The Simpsons. But that being said, I’m not really on board with the past 7 or so seasons. After about the 11th season (give or take), things changed with the show. Its humor switched and the normally focused episodes (and generally topical) seemed to disappear. Instead of funny and usually heart-warming weekly episodes revolving around the family it became a Homer’s crazy-situation-of-the-week episode or episodes relying on guest stars. I guess to go colloquial; I think The Simpsons jumped the shark. It lost its edge, its heart and it eventually lost me. Now to get my fix I watch the old seasons on DVD, remembering a time when The Simpsons ruled and pining for its well-deserved comeback. Something big. Something grand. Something like a movie.

I was half on board and half skeptical when I heard that The Simpsons Movie was moving forward. Part of me thought this was a perfect opportunity to return to form, to take advantage of all the room that a PG-13 rating has to offer and rekindle that flame in my Simpsons-loving heart. The other part of me was nervous that it was going to be 90 minutes of the humor that turned me away and could quite possibly be some sort of final nail in the coffin of my hope of ever returning to the series. So where did I land?

Well, I’m not returning to the series, but I’m certainly not putting away the DVDs. The Simpsons Movie was good. Not great, but good. I’d classify it as a really good episode of the declining seasons. That’s a compliment. There is a solid mix of the old and new styles, both drawing laughs (although I did get a little tired of “wacky” jokes like Homer putting the hammer in his eye). The movie starts off in Springfield where the pollution is getting out of hand. The familiar faces of the town shun warnings from Green Day, Lisa and Colin, Lisa’s new crush, about the impending danger this pollution will lead to if Springfield doesn’t clean up its act. The final straw breaks the camel’s back in the form of Homer dumping a silo of pig crap into the lake causing Russ Cargill, the head of the EPA, to call for the encapsulation of Springfield in a large dome. When the townsfolk learn that it was Homer that caused their captivity, they turn on the Simpson family, who escape the dome through a sinkhole and head to Alaska to build a new life. But soon after, guilt catches up with them in one form or another, and our favorite family returns to their town to set things right, just as the EPA has decided that Springfield cannot be salvaged and must be blown up.

Despite the cries of the uninformed back when the show started, The Simpsons have always been grounded by its heart and family values. The family works because, despite everything they do or go through, the characters clearly love one another. It’s the stories that launch from that emotional grounding that made the show great. And it’s what works most in this film. My favorite scene is the seemingly simple, yet overwhelmingly moving, video Marge makes for Homer, explaining why she taken the children and left him. There are stories that Julie Kavner, the voice of Marge Simpson, had spent almost an entire day of recording that one scene and the payoff is an incredibly powerful, touching scene that rivals anything in a conventional drama. And it is in those moments that I’m reminded why I love The Simpsons like I do. And it is because I know they are capable of those moments that I felt justified in hoping for just a little bit more from the movie.

I do recommend watching The Simpsons Movie. Despite wishing they’d spent just a little more time on the story and script, I really did enjoy myself watching one of my favorite animated families in an epic adventure. There were glimmers of what was, and if this film had time to fully bake, I really believe it would have risen to the greatness it hints at. Whether you love the old or new humor, or both, you’ll get laughs throughout the film. And if you’re like me and pining for what was, this movie may not fully revive The Simpsons for you, but it offers that spark that keeps the Simpsons flame alive in our hearts.