Skip to content
home Previews ‘The People vs. George Lucas’ Needs You

Ok, so, you know how you and your friends have always complained that George Lucas ruined your childhood irrevocably by adding footage to the original ‘Star Wars’ trilogy? Remember how you felt when you found out that Guido shot first?

Well, here’s your chance to quit complaining and do something about it.

Exhibit A Pictures, based out of Denver, Colorado is producing ‘The People vs. George Lucas.’ The film’s goal is to explore the relationship between Lucas and his many devoted fans and how it has changed and why George does what he does, tweaking each movie, with every new version.

‘Great,’ you’re thinking, ‘another movie being made. I’m going to yawn.’ Ah, but here’s the cool part. They want you.

Exhibit A is asking fans of the movies to film themselves talking about how they feel about the movies, what George did to them, etc.. They’re describing it as the first truly democratic motion picture.

If you want to participate, head over to their website and download the forms and get shooting. 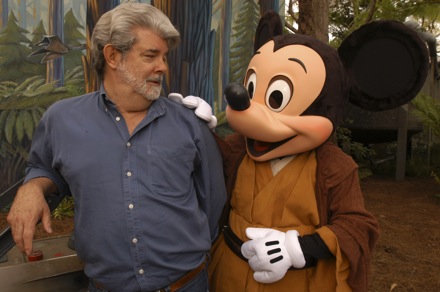 (George is the one on the left.)