In honor of presidents day, I was trying to think of a film having to do with a President that I’d want to take another look at, I landed on one of my favorite films of all time, JFK.

Oliver Stone,  in 1991 wrote and directed in this reviewers humble opinion, one of the most exciting biopics I’ve ever seen (its kind of a biopic right?). JFK despite its title is not about the John F. Kennedy, but about an investigation into the President’s assassination by New Orleans DA Jim Garrison (Kevin Costner). It has everything I like to see in a film, suspense, deceit, murder, cover ups, and conspiracy. Even now, seventeen years after the release of the film, there are still various arguments into its accuracy. Say what you will, its still an amazing film. 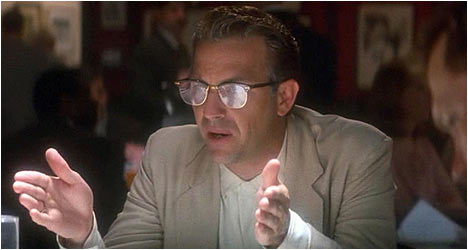 It opens with a newsreel type montage during the opening credits, combining both film from that fateful day, and recreations by Stone and his crew. The film flashes forward to the release of the Warren Commission, it is this document, and the connections to Garrison’s New Orleans that inspires him to begin his own investigation into the assassination.

Garrison and his teams investigations opens up a whirlwind of conspiracy and lies. The film doesn’t just ask who, but it begs the question, why, what was the motivation, who gained with JFK out of the way. Across the board, the film features stellar performances by Joe Pesci, Tommy Lee Jones, Michael Rooker, Jay Sanders, and Gary Oldman as Lee Harvey Oswald.

Despite its controversy, the release of JFK spurred congress to pass the 1992 Assassinations Disclosure Act. The film earned 8 Oscar Nominations, and won Best Cinematography and Film Editing, and his held up by Oliver Stone as his “Godfather.” I can’t argue that, it probably is one of my favorite Stone films of all time.

What’d you guys think of JFK?

One thought on “Retro Review: JFK”