Personally, of all the performances nominated for Best Actress, Amy Ryan is quite possibly my favorite. Some may call it bias, as she is nominated for her role in Ben Affleck’s Gone Baby Gone, and I am born and raised right outside of Boston.

Ironically, I saw Gone Baby Gone in New York City, just as I’d made plans to move back to Boston. I swear, if you’d told me they’d plucked Ms. Ryan from the crowd in Dorchester, I would have believed you. Her performance was great, convincing, conflicted. But it wasn’t till a month later, I truly saw how much Ryan had become Helene McCready. I stil figured hey, she could just be a great local actor. Ryan allowed Helene McCready to consume her, from her accent to her mannerisms and expressions, Amy embodied the role.

Amy Ryan got her start right out of high school in a National Tour of Biloxi Blues. She made her Broadway debut in 1993 as Tess in The Sisters Rosensweig. Director Sidney Lumet cast her in three different roles on his television series 100 Centre Street. Throughout her career, she was featured in shows like Law & Order, and The Wire. 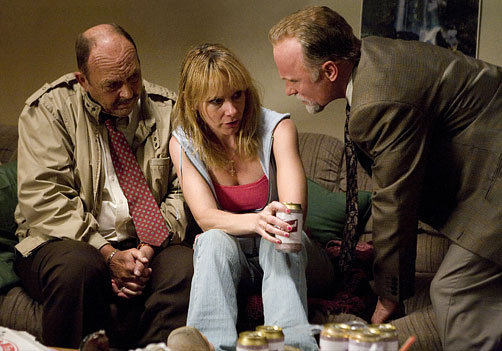 Ryan’s feature film debut was in the film Roberta, a small film also starring Kevin Corrigan (Goodfellas, The Departed). Later roles include Albert Brooks’, Looking for Comedy in the Muslim World, Capote, Dan in Real Life, and Before the Devil Knows You’re Dead. The critical attention only just arrived, with her role in Gone Baby Gone as a drug-addicted mother who lost her child. Named Best Supporting Actress by the National Board of Review, and nominations from the Screen Actors Guild, and Golden Globes, in an industry of constant snubbing, its good to see Ryan’s work receiving the attention it deserves. In Gone Baby Gone, Ryan’s character goes from a bratty, trashy drug-addict who doesn’t understand the consequences, and ends with a woman who wants her child back (I really don’t wanna give away too much of the progression without spoiling the film). Click here for a great scene from the film.

Amy will be seen next in Changeling, by Clint Eastwood coming out Fall 2008, and filming Imperial Life in the Emerald City with Matt Damon, directed by Paul Greengras. I have no doubt whatever the outcome on Sunday, Amy still has as lot under her sleeve.