The Pythons made three official feature-length films, not counting ‘And Now For Something Completely Different’, which was a collection of skits from their television show, ‘Monty Python’s Flying Circus.’ The first was ‘Monty Python and the Holy Grail’ and the third was ‘Monty Python and the Meaning of Life’, which were both very funny and effective, but somewhat flawed in terms of a well structured narrative. Their second film, however, was not only a masterful comedy providing some of the Python’s best lines and gags, but was also an excellently structured narrative that playfully skewered religious zealots and protesters. This film was ‘Monty Python’s Life of Brian’. 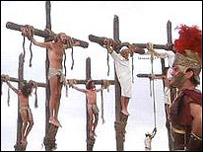 Directed by Python Terry Jones, ‘Life of Brian’ tells the fabled tale of Brian Cohen, born a few stables down from Jesus Christ. Brian grows up to resent the Romans (despite learning that he is, in fact, half Roman due to his mother being “raped” by Naughtius Maximus) during their occupation of Judea, joining the underground movement known as the People’s Front of Judea to protest the Romans with the goal of driving them out. After joining the sect, Brian is tasked with painting the Roman walls with the Latin phrase for, “Romans Go Home” (leading to one of the film’s funniest gags where a Roman Centurion catches him and helps correct his Latin grammar, then forcing him to write the phrase over and over again). He’s found in the morning, having painted the entire city with the phrase and chased out, ultimately leaving him to pretend to be giving a sermon in the city to avoid Centurion detection. This faux-sermon gives Brian followers, forcing Brian to flee from the growing number of people who believe he is the messiah. He tries to convince the crowd that he is not, that they should think for themselves, but he accidentally heals a “mute” and his fate is sealed as a religious leader. Brian is ultimately caught by the Romans and is sent to be crucified. He receives a pardon from Pontius Pilate, but misses his chance to accept it, leaving him up on the cross at the end of the film listening to Eric Idle singing the tune, “Always Look on the Bright Side of Life” from another cross.

The film caught controversy early on when the financial backers read the script and pulled out due to the content, which they thought would be too offensive. George Harrison, of Beatles fame, came in and provided the money the Pythons needed to make the film. After the film was finished and released, it was protested and banned in many countries due to perceived slight on Christ. However, in watching the film, Christ himself actually only appears twice: once as an infant in the manger scene and once giving his sermon about those who shall inherit the Earth. Both scenes are brief and are not directly played for comic effect (the humor comes from the misunderstanding of Christ’s words). Rather, the film itself lampoons blind followers of both faith and movements. So while the religious zealots are absolutely mocked in the film (Brian’s accidental movement breaks off into sects, one believing that his shoe is a sign, the other believing the gourd he 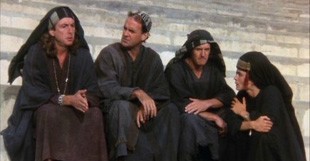 dropped was a sign), protestors and underground movements carry their share of parody in this film (“What have the Romans ever done for us?” “The aqueducts.” “Paved roads.” “Public education.” “Health care.” “Ok, besides the aqueducts, paved roads, education and health care, what have the Romans done for us?”). Perhaps if ‘Life of Brian’ protestors had watched the film, they would have seen that Christ wasn’t the focal point of the humor, the mob mentality was.

The Pythons played their various roles in the film quite effectively. Notably, Graham Chapman’s ability to play the leading man served the film well. His charisma and believability as Brian allowed the audience to sympathize with his character and through this, helped convey the message the film was trying to get across. The rest of the cast, playing multiple roles throughout the film in typical Python fashion, were equally effective. Michael Palin’s Pontius Pilate is by far one of my favorite characters created by the troupe. The scene in his castle where Brian is captured and the ensuing miscommunication between Pilate and everyone in the room due to his lisp is one of my absolute favorite comedic scenes in film. Terry Jone’s direction is relatively standard, not lending itself to being noticed but rather lending the film to the story and to these fantastic characters created in the Pythons’ script. The writing is superb and is a shift for the comedy troupe; it moves away from their segment based writing, a patchwork of scenes, and instead is a cohesive, fluid story for the 90-minute duration.

As I said, this is clearly the most well made film by Monty Python, although that is by no means a dismissal of the other two. It has withstood the test of time: the humor is still hilarious and the points the film is trying to make still resonate with today’s culture. With Criterion providing a cleaned up version of the film, there’s really no excuse to not go revisit ‘Life of Brian’. And if you haven’t seen it yet, go watch it so that you can join those of us who have in chorusing, “We are all individuals.”