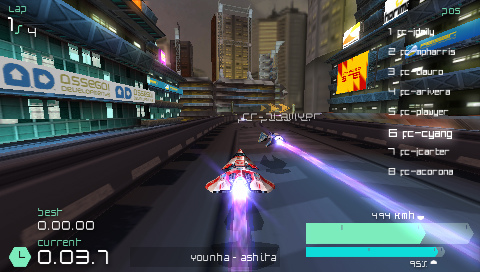 It’s a good time to be a PSP owner, last week saw the release of WipeOut Pulse, the follow up to the PSP launch title that built a decent community. With Patapon dropping this week, and God of War in March, it’s gonna be hard to focus on one. But, I’ve found my self not being able to put WipeOut Pulse down since I picked it up last week.

I’m a weird gamer, I either really get into a game, or I play it for a few hours and give it up. Examples, I never picked up Saints Row until recently, but barely played two hours, but played COD4 non-stop. There’s no rhyme or reason to it. WipeOut, for one reason or another, has turned me into a “completist.”

It’s the same gameplay we’ve known, the colors and graphics a little softer, a little nicer. I found the controls great, but the game fairly challenging, its fast paced, but not so much that you want to toss your PSP across the room. With only 12 tracks, it becomes a bit repetitive (perhaps this is why the game got easier the more I played), but never the less still fun. The game also allows you to play your own MP3s off your memory stick, though I shudder to think replacing the music with anything but techno!

With online multiplayer, downloadable tracks, customizable ships, the replay value of this game is extremely high. There is a good community building around this game, though with the amount of great games coming out for the PSP, dropping $29.99 on this title may be difficult. But, then again, it’ll be a game that will surely go in and out of your PSP for quite some time.