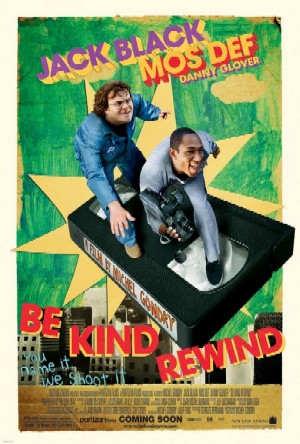 Eternal Sunshine of the Spotless Mind is one of the most interesting executions of a film that I can remember in recent history. What makes Michel Gondry such a unique filmmaker is making something that looks like a complicated effect a rather simple camera trick. Too much of the trickery seen in film these days is the over-reliance on CGI, rather then good the rather clever trickery that was around for year prior to computer effects.

So why the huge preface? Because this was what I loved about Be Kind Rewind, it showed a couple of locals from Passaic, New Jersey, recreating some classic movies, using only what they had in their reach (my favorite was the interesting use of a Pizza, I don’t wanna ruin this gag though). The film is about a video store called Be Kind Rewind in Passaic, New Jersey, with a declining clientele due to big budget DVD rental houses like West Coast Video. The building which Be Kind Rewind is in is barely up to code, and faces a building developers wrecking ball to make way for a modern housing complex.

Mr. Fletcher (Danny Glover), the owner of Be Kind Rewind is faced with this reality, so he takes a trip to analyze the competition, leaving the store in the hands of Mike (Mos Def). Up the street is Jerry (Jack Black), who after an accident of sorts, is magnetized, and inadvertently erases the entire stores video collection. To cover up their mistake, Mike and Jerry start “sweding” (their own word) films, making up for their lost catalog.

The movie is genuine, and at times heart-warming, but at the end of the day, a bit all over the place, though, this wasn’t an issue for me whatsoever. I related to the idea of shoestring, run-and-gun, with the editing done in the camera movies. It was funny, and there was quite a bit of heart there. Was it as in depth, detailed, and executed as well as Gondry’s other films? Not quite. Was it entertaining? Mos’ definitely (Pun-fully-intended).

Michel Gondry has been big into Youtube, and urges fans to “swede” their own films. Let us know if you see any fun “swedes.”