William Walker arrived in Nicaragua in 1855, quickly taking over, making himself president. By 1860, he was dead, executed by the government of Honduras.

‘Walker’ is not so much a biography, but an impressionistic painting of Walker’s life and times. Director Alex Cox, (he of ‘Repo Man,’ and ‘Sid & Nancy,’) paints Walker as a man driven to produce, driven to make the people conform and follow his rules. 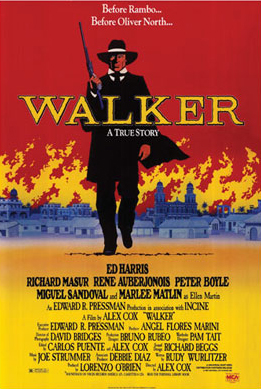 Walker’s intensity is driven home in the performance of Ed Harris. He keeps cool under pressure, killing anyone who questions or doubts him, but in the end, the audience still likes him. It takes work to create a character that blood-thirsty that you still kinda want to hang out with. The supporting parts are also interesting. Peter Boyle. Richard Masur. Rene Auberjonois. Each one, (and every other character in the movie,) chews at the scenery, making sure you notice them.

While parts of the movie feel like a traditional biography, Cox always makes sure there’s some sort of lunacy around every corner. He revels in anachronisms, putting Walker on the cover of ‘Newsweek,’ and ‘People,’ he has cars drive by characters riding in the historically accurate horses. He has people drinking Coke and smoking Marlboro cigarettes.

What Cox is trying to say, I gather, is that maybe America, (or most western countries) is like Walker. Taking over, running roughshod over the locals, and doing whatever we damn well please. The final sequence of the movie leaves no doubt that Cox is drawing parallels to Vietnam. And he wants us to question that policy. Is that the way to treat a friend? To view the movie today, does the point still hold? Or does it look like a scrapbook album photo, one where we can look at it and remember how silly we were? I think the answer lies somewhere in between.

That Cox is a talented filmmaker is of no question. That he sometimes gets overwhelmed by the material and the actors, (look, there’s Ed Harris, hey Joe Strummer will do the music and have a cameo,) is obvious. I think the problem is that there is so much that Cox wants to tell you, he tries to cram it into the movie, which, in the end, leaves you a little overwhelmed and ready to burst with facts.

Where Cox aimed to create an exciting and, most likely, a revolutionary movie, he ends up creating a nice movie. One you smile at and say, ‘yes, you’re funny,’ but not one that gives you no other option but to laugh out loud. ‘Walker,’ is a film, I believe, that will improve with successive viewings. But the fact that you have to do the work, not Cox, is the movie’s greatest failing. –Sam