What is the purpose of a thriller? What is the audience seeking when it goes to see one of these movies? It is a modern day version of the Romans throwing people to the lions? Is it modern day blood sport? These are the questions Michael Haneke asks in his movie ‘Funny Games.’ (If the plot and the title sound familiar, an American remake, also directed by Haneke opens shortly.) 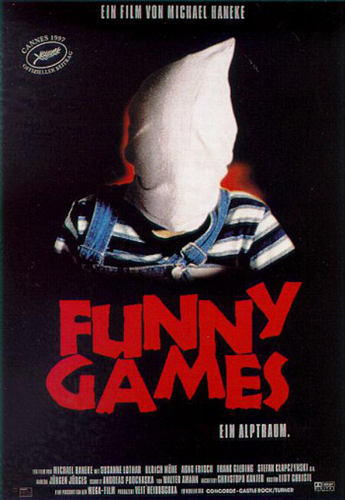 A German family made up of father Georg, mother Anna and son Schorschi arrive at their vacation home as the movie begins. Georg and his son go to the lake behind the house and begin getting their boat ready for a sail. Anna stays in the kitchen and prepares dinner.

Then there’s a knock on the door. It’s a boy from next door. He introduces himself as Peter. He’d like to borrow some eggs. Anna gives him four, but he accidentally drops them on his way out the door. He asks for another four. He knocks her cell phone into a full sink. Frustrated, Anna asks him to leave. Then Paul shows up. Similar in age and dress to Peter, he asks what the trouble is. Georg and Schorschi arrive from the water’s edge, after hearing commotion. Paul admires Georg’s golf clubs. He takes a practice swing, very accurately hitting George in the leg, breaking it. The two boys march the family into the living room. The game is about to begin. They bet the family that they won’t still be alive come daybreak.

Haneke’s goal is to comment on violence in popular arts. Paul, clearly the leader of the two boys, in several cases, turns to face the camera and, breaking the fourth wall, addresses the audience. Does the audience want to bet on the family’s survival? Later on, he refuses to finish yet another violent act because, it isn’t dramatic enough.

Haneke wants to challenge the viewer. Why are you here? What did you come to see? How do you feel seeing exactly what you asked for? While these are interesting questions, placing them in this genre of film proves problematic. Can you make a thriller and then make the audience feel bad for buying a ticket to your movie? Is it ok to justify violence and degradation because your audience, (according to you,) wants to see it?

There is one sequence towards the end of the movie where things play out and a resolution where the most pleasing option presently possible is presented. However, Haneke then literally rewinds the movie and goes down a much more gruesome path. Why? Because the audience doesn’t know what it wants? Because an audience needs to be punished for its bloodlust?

Making a movie in a genre and then destroying the genre’s conventions isn’t great innovation. It’s an exercise in moral superiority. If one sits down to watch and exciting movie, one doesn’t want the person sitting next to you loudly complaining that you’re foolish for wanting to watch this. This is just what Haneke has done. In his desire to have his cake and to eat it too, Haneke ends up with a movie that is pleasing to no one.

Addendum: The up-coming remake of this movie is also problematic. From what I’ve seen and read, the new movie, (starring Naomi Watts, Tim Roth and Michael Pitt,) seems to be almost a shot-by-shot remake of the original film. Why? If an audience wants to be preached to, couldn’t they just rent the original? Or is Haneke’s goal to make him feel superior and better than everyone else on earth? What’s next, the Bollywood remake? Or maybe the kabuki theater remake? -Sam