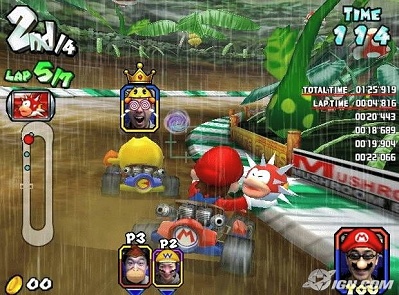 April 27th, for you Nintendo people, mark your calendar. Mario Kart Wii, the game people have been waiting for since well, the last Mario Kart. The game will come bundled with an innovative wheel peripheral that players will dock their Wiimote’s to, and steer in the air like maniacs (as if you didn’t look silly enough hitting imaginary tennis balls).

The game features 16 courses and the ability to play with 11-other players through Nintendo WFC. The release of the game will also launch the Mario Kart Wii Channel. The channel will allow players to compete in tournaments, check their rankings, and download their friends Ghost data. This online play is where Nintendo has been severely lacking, so its great to see these features in Mario Kart Wii.
Unfortunately, I’ll have to go to a friends house to try this one out, I’m the only person on earth without a Wii.