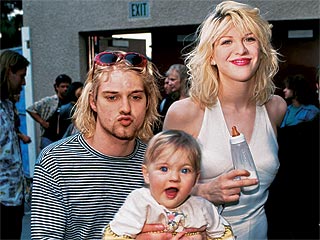 In what appears to be an ongoing contest to outdo herself in finding ways to make Nirvana fans groan in shame, Courtney Love has made another bold decision to capitalize on Nirvana and her deceased husband, Kurt Cobain. This time, Love, who owns the rights to Cobain’s likeness as well as a majority of Nirvana, has given the approval for Cobain’s name, lyrics and signature to appear on a pair of shoes. Converse, in celebrating it’s 100th anniversary, is releasing a special edition line of footwear which will have various deceased artists’ names and such on them. Classy!

Not since Hoover had a dead Fred Astaire dance with a vacuum on television have we seen such greatness in promotion.