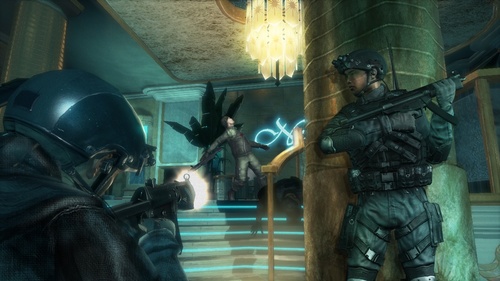 Rainbow Six: Vegas 2 is the perfect example of how not to change a good thing. Great gameplay, great graphics, great multiplayer, now even better! As I’ve said before, I was never a fan of the previous Rainbow Six series, I didn’t see them as bad games, just games I wasn’t interested in playing. Lo-and-behold, I checked my mail to find a copy of Vegas from a friend as a gift, and lost the next few months to that game.

Over a year later, Ubisoft releases a game that really. isn’t leaps and bounds better then the first. They released pretty much the same game, just with important tweaks.

The big thing that stands out for me, load times. The load times are improved greatly, whether in solo or multiplayer. It loads fast, and throws you right into the game.

As far as advances in gameplay, the biggest addition is the ability to run. A character is now allowed to sprint, much like Call of Duty 4. In just the first few minutes, the ability to run and cover against a wall or box gave a whole new feeling to the experience. I mean come on, if you were fighting a room full of terrorists, would you walk carefully to the box for cover, or would you haul ass? That’s what I thought.

I honestly wasn’t too impressed with the story the first time around, other games have a much more cinematical, enthralling experience (read: Call of Duty 4), but, it’s still fun. The huge improvement here is rather then only gaining experience and unlocking weapons in Multiplayer, this is available are the same across the board in an all new Advanced Combat Enhancement and Specialization (ACES). You unlock a SPAS-12 in single player, you can use it in multiplayer. An UMP45 while doing terrorist hunt? You got it on all the game types. Each category of the ACES has 20 levels to be unlocked, including weapons and armor, and experience points to aid in your rank.

During Single-player, you have to babysit your AI controlled teammates, as they often find themselves waltzing into a firefight, but if used correctly, they are a great advantage in the battlefield, they can often clear a room if given the right direction and backup. 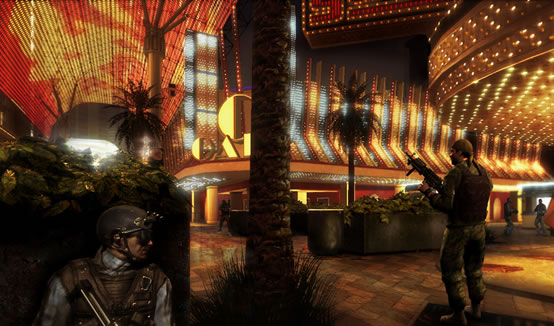 The reason I play this game though isn’t the single player experience, it’s the ability to play with a friend, whether in co-op, or versus mode. The challenge of picking a difficult level and going on a terrorist hunt is very fun. Story mode though with the full story & cutscenes this time around, is limited to two players only.

The different gametypes in versus mode are excellent, with 12 maps total. My one complaint here is the change in the customization of respawning. Certain gametypes only allow for 2/3 respawns. This will make the epic long attack & defend matches a thing of the past, but hopefully, I’ll get used to this.

All, in all, its a great game. But if you’re looking for a vast improvement over Vegas 1, you won’t find it here. If you loved Vegas and are looking for some more tactical first person battles, go pick this up today. I’ll see you on Xbox Live.