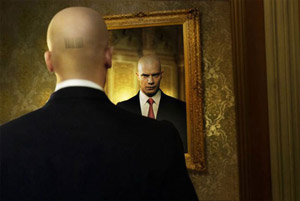 Netflix. If one were to look it up in the dictionary, they might find a definition reading something like this: “method of which to watch crappy movies that you would never in a million years pay to see in theaters, or buy the DVD of, but yet had some dark desire to watch the train wreck and ridicule it in pretty much the same fashion that people laugh when someone gets hit in the groin”.More… That was the basis upon which I tossed the newly released to DVD, Hitman, into my player and settled down for what I thought was sure to be a really goofy, over the top, cinematic slap to the nuts… Hitman found a way to take even that joy away from me.

Based off of the series of video games bearing the same name, the story followed the exploits of Agent 47, and his ‘struggle’ to stay alive after being sold out during a job. What happened next was a zany game cat and mouse where Agent 47 (Timothy Olyphant) and a Russian prostitute/informant (Olga Kurylenko) were forced to evade Interpol, the Russian secret police, and other hitmen, all the while attempting to get some revenge on the person who set him up (oh yeah, plus buy the prostitute a vineyard-at least I think that’s what happened in the end-I wasn’t really paying attention at that point). Other than that I don’t feel too much like dwelling on the plot any further since it was obvious that the writers really didn’t either.

Back to what I said earlier, about how Hitman found a unique way to disappoint me-allow me to elaborate. I set my expectations extraordinarily low on this one so as I could laugh and enjoy it, but Hitman ruined that by not actually being as bad as I thought it was going to be. Instead it found a way to make everything generic, low quality, and just slightly on the happy side of nonsensical. For example, I was expecting flamboyantly bad wirework-crap-stunts. Did I get that? No. Instead I got semi-grounded and only slightly over the top gunfights/swordplay. That should make me happy, right? No- not when it‘s poorly choreographed and boring, since about everybody just lined up to get shot, not really putting up much of a fight (seriously- It looked more like I was watching a movie rendition of duck hunt rather than Hitman at times). Another case in point- the dialogue. I was expecting horribly delivered lines, and completely moronic one liners. Did I get it? No. All I received was bland, forgettable and generically delivered dialogue that wasn’t completely horrible but was mediocre at it’s rare finest—and their best shot at witty back and forth was Agent 47 periodically threatening to toss his prostitute sidekick in the trunk if she “gets in his way again” (you see, it sort of became their ‘thing’ and they did that several times throughout the course of the film).

I guess overall the best thing I can say about this movie is that it never really approaches Uwe Boll levels of bad, but in the end that was probably it’s biggest downfall—at least if it did, then with a few beers mind you, I could have had a good time laughing at it’s expense.