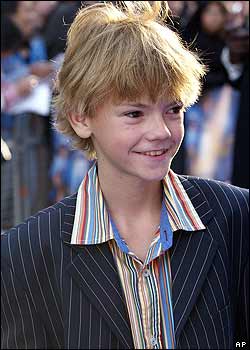 Thomas Sangster (Love Actually, Nanny McPhee, and Doctor Who) has been cast in the title role of the new Tintin trilogy. The film is being produced by Steven Spielberg, and Peter Jackson. My issue with this? I can’t find a picture of him on the internet that he doesn’t look 9-years old in.The film is said to be shot entirely with motion-capture technology much like Polar Express and Beowolf. Motion capture veteran Andy Serkis will be starring as Captain Haddock.

Tintin is based on the old children’s comics written by Hergé, published for decades in hundreds of different languages. I grew up watching these, and to see it in the capable hands of Spielberg and Jackson is a warm calming feeling. The first installment is set to start in September for a 2009 release.