Kevin Spacey, we’ve been been there for good times, and we’ve been there with bad. We were there when you blew us away from The Usual Suspects, or when we collectively cried, why, why, when you were in Superman Returns. We’re not here to think of the bad though Kevin, we’re here to celebrate the good times.

You played a despised office manager in this David Mamet film, responsible for handing out the sales leads, you spoke of your character as the “catalyst for events, since people are struggling either for or against [you].” The cast was star-studded, with everyone taking pay cuts to appear. Al Pacino, Alec Baldwin, Jack Lemmon, you met some amazing folks on this outing, and got some great critical acclaim.

In this one you starred as a producer that was allegedly modeled after Scott Rudin. You did great on this one because you frightened me away from pursuing a career in management/development. Remember when Frank Wahley brought you Equal instead of Sweet-and-Low and you flipped on him? I’d like to think you’re like that in real life. But I know you aren’t, you just are a damn good actor. 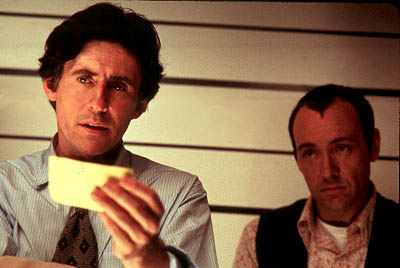 It’s hard to talk about this movie without ruining it for the three people who haven’t seen it. It opens with the end of a shoot out on a boat in San Pedro, and one of the two survivors was you Kevin Spacey, playing Verbal Kint. We spend the film with you, and you take us back to a line-up of the usual suspects. You weave us a tale of five conmen brought together with the collective feeling of revenge. However, they find themselves under the influence of legendary criminal, Keyser Söze. You starred with Gabriel Byrne, Chazz Palminetri, Kevin Pollack, Benicio Del Toro, and Stephen Baldwin. Remember the Academy Awards? You and Christopher McQuarrie took home Oscars, you for acting, him for writing.

Remember when you co-starred in this adaptation of a James Ellroy novel by Curtis Hansen. You starred along side Aussie’s Russell Crowe and Guy Pearce as a Narc-cop in the LAPD. Your character Sergeant Jack Vincennes was tied in close to showbiz, and were a technical advisor on the Dragnet type show “Badge of Honor. You’d make high profile collars and get kickbacks from Sid Hudgeons (Danny DeVito) and his Celebrity Gossip magazine. But you found yourself in the wrong place at the wrong time. A jail cell brawl with a group of Mexican’s who were under arrest for the assault of a fellow police officer. Under probation, you and your Aussie co-stars find yourself investigating a whirlwind of drugs, prostitution, and other vices in the city of the angels.

American Beauty (1999)
This was a good time for you Kevin! You played a man in living in Suburbia, with a not-so-faithful wife, and crush on your daughters friend, Mena Suvari. The movie was a great representation of times in the burbs. Spielberg called it one of the best films he’d seen in years. It was Sam Mendes’ first feature, and through him you acted your way to another Best Actor trophy, and Mendes got his own statue as well.

Good times we had Kevin, but why have you been giving us stinkers like Superman Returns, and K-Pax? I completely respected you in Beyond the Sea even if I didn’t completely love it. I’m looking forward to 21, you spent a lot of time in my hometown for it. We’ve always had an honest relationship Kevin, I tell it like it is. Seriously, don’t do another Superman, I’m still trying to forget it.

One thought on “Good Times with Kevin Spacey”