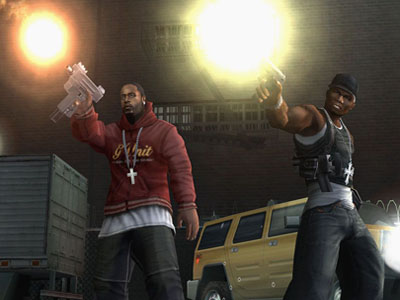 In an unexpected announcement, apparently 50 Cent will be appearing in a sequel to his videogame ’50 Cent: Bulletproof’ (which itself was a tie in with the film Get Rich or Die Tryin’). Sierra will be developing the game, ’50 Cent: Blood on the Sand,’ and it’d be safe to assume for various platforms (thank god!).

David Kim, VP of Marketing at Sierra, told Variety that research definitely showed an interest in the game (Seriously? Someone ask for his letter of resignation). The game will feature new music from 50 Cent and his crew.

The storyline is stellar: 50 is in a war torn Middle Eastern country performing a concert. When the show is over, he finds out the promoters have no money to pay him so, rather then cash, they give him a valuable skull, which, in turn, is stolen. Now 50 ain’t scared of dying, he’s been shot like seventeen times. So, the rest of the game is trying to get his prize back, and finding out why it happened.

Seriously, buy me three copies of this when it comes out because I’m THAT excited.