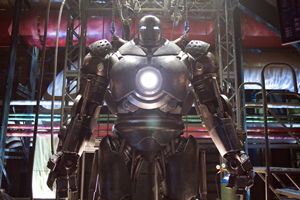 Yahoo! Movies have three new pics from the upcoming ‘Iron Man,’ including two pics of the Iron Monger, who will be Iron Man’s adversary in the film. This has me excited for some bad ass, rock ’em sock ’em robot battling.

Check them out here!