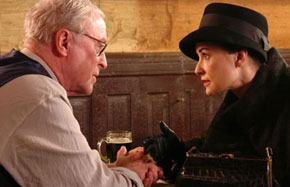 Mr. Hobbs is a janitor with heart of gold. Laura Quinn is a no-nonsense businesswoman, the lone example of her sex in the world of diamond companies in 1960’s London. Between the two, who holds the power? Who will keep their cool under pressure? Who has all the angles worked out? In ‘Flawless,’ the answer may surprise you.

‘Flawless,’ is the story of a businesswoman who finds that working hard doesn’t always pay off and the night janitor who wants to get revenge. Quinn is played by Demi Moore, with a Jackie Kennedy haircut, a strange American/English mix of an accent (she says almost every word with an American accent save for ‘schedule,’) and a cigarette in her hand. She is a high-up at Lon Di, the world’s largest diamond company based in London. However hard she works, she never seems to get ahead. And then one day, the janitor tells her that she’s going to be fired. How does he know? You’d be amazed at what people say around the janitor, he says. She does some snooping and finds that Hobbs is correct, she’s on the chopping block. They’ve even dictated her termination letter and have it filed away for future use.

She meets again with Hobbs and he says he has a plan to get even with the company and offers her a chance in. He’s going to rob the company. He cleans in front of the safe every night. He’s left alone. He could do whatever he wants during his shift, why not a little thievery? Not a lot of diamonds, enough to fit into his thermos. They’ll never be missed and both he and she will be set for life. Is she in? She agrees.

And then it goes down. And goes down far better than she had expected. But then investigators are called in, fingerprints are taken and Laura Quinn begins to worry. Did they do too much? Hobbs didn’t give her all the details, so she doesn’t know where they are. She must trust him. Hobbs, for his part, is unflappable. He knows they’re going to make a clean getaway, as long as Laura keeps her cool.

‘Flawless’ is a wonderful time capsule of a movie. Opening and closing with Dave Brubeck’s ‘Take Five,’ the movie moves along at a slick, but never rapid pace. It’s a cool, smooth diamond of a movie. The action is minimal. In fact, they don’t even show you the actual heist until long after the fact. This is a grinding gears movie. The characters don’t really enter into the story all that much, you watch the movie for the execution of the plot. Will they pull it off? How will they pull it off? What side is the private investigator really on? Much like the mysteries of Agatha Christie, ‘Flawless,’ keeps you guessing and wondering what’s really going on until almost the final frame.

The set dressing is spot on and director Michael Radford does an excellent job of creating the business world of a major city in 1960. The movie’s whole tone is understated and there’s a good chance that this movie will come and go without much of a blip. That’s a shame. While it’s not a perfect movie, it’s certainly entertaining and a fun couple of hours. In a season where tripe seems to be dumped onto movie screens week after week, ‘Flawless,’ is a gem in an otherwise boring cinematic month. -Sam