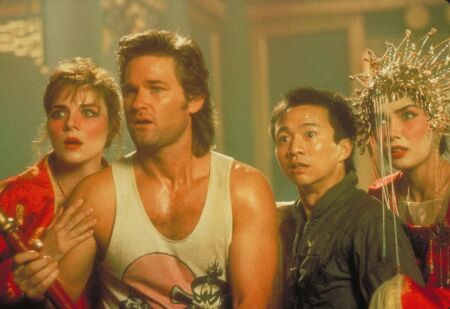 While I really enjoy watching what can best be described as film (the artistically challenging, the avant-garde, the pictures with a purpose), I have my guilty pleasure side when it comes to the talkies: schlocky, mindless fun that seems to serve no other purpose than to entertain; those popcorn movies at a matinee where I watch and, while I don’t learn anything about myself, I walk out gleefully smiling at what I just saw. Or I’m thoroughly entertained for the hour and a half that my brain took a siesta on a Saturday afternoon watching the opposite of high art. You know the movies, you love them (either secretly or with a bold, outward embrace) and after you’ve watched them, you know that they’ll probably end up on TBS, but, hey, that adds to their charm. This new column is dedicated to those great movies that are what Saturday afternoons exist for.

My first pick for the Saturday Afternoon Sweetness installment is one of the ultimate kick-ass, rainy Saturday afternoon movies. I’m talking about none other than ‘Big Trouble in Little China.’ Let’s run through the checklist of why this movie rules:

1. Kurt Russell – Any movie with Kurt Russell instantly gets a free pass in my book. That guy is awesome. But in ‘Big Trouble’ there are specific things that make Kurt Russell rule just a bit more. Killer mullet? Check. Tight jeans tucked into his boots? Check. Awesome 80s tank top? You know it. And that Kurt Russell attitude? In spades. Yeah, Kurt Russell really stepped up his awesomeness in this role.

2. Theme Song – Everyone know that to make an 80s movie really, really work, you need a theme song that at the very least references the title of the movie. Now there are exceptions, but we all know that the theme song can really drive the point home. ‘Big Trouble in Little China’ has a song at the end of the film called ‘Big Trouble in Little China’ whose chorus is “Big trouble, in little !” Count it.

4. James Hong – The name may not be instantly recognizable, but look him up and you know who he is. He’s in everything, including this where he plays Lo Pan, a curse ancient being with powers like shooting light from his mouth.

The movie’s plot is this: Russell’s character, Jack Burton, is a trucker who meets up with his friend Wang Chi. Wang’s girlfriend is kidnapped, so and Chi go to rescue her and get sucked into this whole other world that exists below . As they try to rescue the girlfriend, they learn about an ancient curse put on Lo Pan, who’s only hope to break the curse is to marry a green-eyed girl. And it just so happens that Chi’s girlfriend is green-eyed. So they go to rescue her and all sorts of cool action and special effects take place.

Like I said, quite possibly the quintessential Saturday Afternoon Sweetness movie. John Carpenter embraces the fun and the action and Kurt Russell owns. Watch it again and try not to sing the ‘Big Trouble’ song.