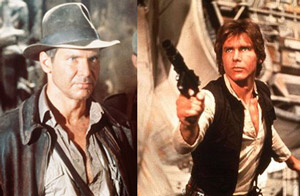 You read that right, the rumor mills have been turning. Everyone knows how bad Spielberg has wanted to direct a Star Wars, but, what tends to go under the radar is Harrison Fords desire to play alongside himself a la Eddie Murphy in any Eddie Murphy movie. He may just get the opportunity with this one.

A script is rolling around that mashes the two Lucasfilm born franchises of Indiana Jones and Star Wars a la cross dimensional time rip. The time period has the story taking place in between Episode III and IV. From what our source told us about the leaked Lucas penned draft is as follows: Han Solo, entering some sort of cros-deminsional time rip, bringing him to the United States in the mid-1940s. This is when Han runs into presumably his doppelganger, none other than Henry “Indiana” Jones Jr. The two embark on a two-part adventure. One to uncover a currently unknown treasure, and two, return Han to his world.

Sure roll your eyes, but this sounds incredible, with Spielberg in the directors chair, I can’t help but feel comfortable. Lets be honest, both franchises sound silly on paper, but have they ever steered us wrong? Exactly. Apparently, Paramount is looking to fast-track this following the assumed successful release of the Crystal Skull. But, I can’t see any earlier then a Summer 2010 release.