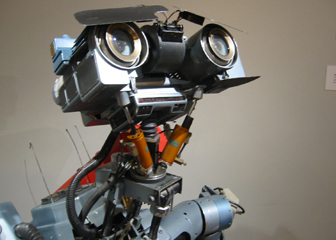 A personal favorite growing up, Short Circuit could see himself being added to the films sacred to me that are being remade. Sure, maybe Short Circuit is no ‘Psycho,’ but, it holds a place near and dear to my heart!  Dimensions a smart group, they see the potential franchising opportunity with a cute loveable robot (Wall-E anyone?)

The original 1986 film featured a military grade robot developing consciousness after being struck by lighting. After being targeted by the government for destruction, he seeks the help of humans. Bob Weinstein called the deal a worthy addition to Dimension Films family slate, I have to agree.

The unfortunate thing here is, they’ll probably CGI the crap out of him. What made the film so great was the fact that Johnny 5 was an actual robot, remote controlled, sure, but its organic real feel gave a kid dreams that he could have his own. Could a CGI-bot be just as convincing? What do you guys think?

In any event, this could have the potential of introducing the character to a new generation, and I’m all for that.