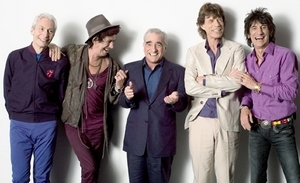 I’ve never seen the ‘Stones in Concert, not sure if I’ll ever get to, but I seriously walked away from this film feeling like I’d legitimately gone to a very rare, very small, personal show with the Rolling Stones.

I can name you a few great concert films, Monterey Pop, Woodstock, The Last Waltz. Funny part about my brief list, Martin Scorsese had his hand in two of them, editing ‘Woodstock’ with Thelma Schoonmaker, and directing ‘The Last Waltz.’

Following ‘The Departed,” Scorsese worked with the Rolling Stones to set up a special stop on their “A Bigger Bang” tour in 2006. Creating a set at the Beacon Theater, the film opens with a rather humorous back and forth between Scorsese and the Stones as they plan for the shoot. Opening with a bang, the band dives right into their set. They play a range of songs, from the well known (Satisfaction), to the not so well known (As Tears Go By). Though, absent here is frequent Scorsese favorite “Gimme’ Shelter.”

The concert isn’t short of guests either, with Christina Aguilera, Jack White, and Buddy Guy, and an opening by President Clinton.

For those of you who are expecting a documentary like Scorsese’s Bob Dylan documentary ‘No Direction Home’ will be disappointed. This is mostly just a concert film. I say mostly because there are interludes through out that give you a sense of the bands history. The theme here being that from day one, no one in the band thought they’d go as far as they have, more then 40 years. You have a rare look of being up close and personal, you get a great sense of their relationship with each other.

There are so many amazing things at work here. You’ve got the tightest band on the planet. You’ve got amazing cinematography, and, of course, one of the best sounding films I’ve seen in a long time. It’s a concert, they wouldn’t be doing the band justice.

‘Shine a Light’ gives you the opportunity to see one of the greatest bands in Rock-n-Roll history in the best seat of the house, a seat thats directed by Martin Scorsese, and shot by Robert Richardson. It really doesn’t get better then that.

One thought on “Review: Shine a Light”