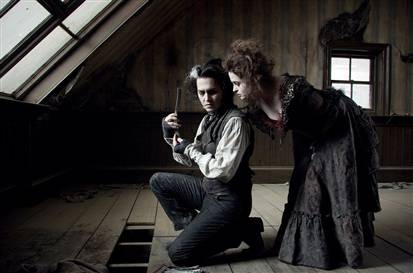 As a reviewer, it’s sometimes hard to put your exact feelings into words. Leaving a film, you’re left with certain emotions and feelings.How do you best summarize them to get your point across without retelling the entire movie and at the same time not drift too far into your personal biases. Walking that fine line between summarizing and opining is a delicate balance. Now, imagine having to do that in song. Tim Burton’s latest film, ‘Sweeney Todd: The Demon Barber of Fleet Street’ does just that, effectively conveying story and emotion through music.

Now, obviously, most of the credit for this goes to Steven Sondheim, whose musical ’s film is based off of. My only exposure to Sondheim’s classic musical was from watching a videotape of the 1979 stage performance with Angela Lansbury when I was in a seventh grade music class. My memory of it isn’t that great, so how closely ’s adaptation resembles it isn’t for me to say. However, as a musical film, ‘Todd’ works. The story follows Benjamin Barker, a husband and father, who is falsely accused of a crime and sent away to prison so the presiding judge can court Barker’s wife and, eventually, his daughter. Barker comes back to , seeking revenge for his wronging, taking the name Sweeney Todd. Todd opens a barber shop and starts slitting the throats of his customers as his attention broadens from revenging only on Judge Turpin to all of the scourge of . Todd drops the bodies through a trap door to Mrs. Lovett’s bakery where she cooks the bodies into meat pies and serves them to the Londoners. And all of this narrative unfolds through song.

If ever there was a perfect Tim Burton movie, ‘Sweeney Todd’ is it. Gothic, macabre, bloody and with a twisted sense of romance, the film is a perfect vessel for ’s filmmaking sensibilities to shine (Who else would find a murdering spree for a lost love as the epitome of true romance?). As a director, has often been accused of style over substance, letting the story take a back seat to the look of a film. In adapting ‘Todd,’ the story is already established, leaving a firm narrative foundation to place his stylized sensibilities. And it works. Really, really well. The blood flows like wine, even occasionally spraying the camera as Todd moves his blade across the neck of his next victim and yet, as he commits each murderous act, we almost sympathize with the barber. While never truly a hero for his actions, never treats him as a villain, either. Instead, he allows the audience to watch as a man whose sole being revolves around revenge lets his story unfold.

And watching him is amazing. His sixth collaboration with director Tim Burton, Johnny Depp embodies the character of Sweeney Todd in such a way that it’s almost impossible to see anyone being able to take on that role so effectively. Depp inhabits the role so well that you easily lose yourself into the film. Depp’s performance, along with the rest of the excellent cast, makes the narration’s flow from spoken word to song an easy transition. Indeed, the cast sings. Where it would have been easy to dub a voice for the musical numbers for each character, Burton made the wise decision to hire actors who could provide a vocal performance that, while may not be suited for a theater stage, effectively evoke the pains and emotions of each character. Helena Bohnam Carter as Mrs. Lovett is an almost obvious choice for the role as she herself seems to come straight from the 1800s, however, her turn as the character brings a depth to the story that elevates Todd’s revenge and almost makes it seem more tragic as she offers him a chance to move on and he can’t see it. The weakest vocal performance comes from Alan Rickman as Judge Turpin, and yet he is easily forgiven as his overall performance is stunning. And, come on, he’s Alan Rickman!

‘Sweeney Todd: The Demon Barber of Fleet Street’ is easily the best musical I’ve seen in a long while. In fact, it has changed my perspective on the genre as a whole and is one of, if not the, best film. has struck a balance between the story and his clear passion for designing the look and the audience gets to reap the reward of that effort with an overall amazing picture. If this were the last movie ever made, ‘Sweeney Todd’ would be the perfect swan song.