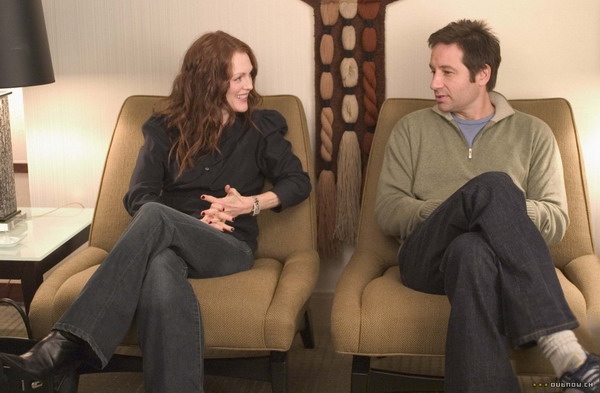 Two couples break-up and make-up in Manhattan in ‘Trust the Man,’ a comedy by Bart Freundlich.

Rebecca is a movie actress, who is just about to make her stage debut in a play at Lincoln Center. Meanwhile, Tom, her husband, has quit his job to stay home and take care of their kids. One day while waiting to pick up their son at school, Tom meets a divorced mother and they begin to schedule play-dates with their kids so that they can hang out.

Meanwhile, Tobey is an adult child, refusing to grow up and refusing to think of anyone other than himself. His girlfriend Elaine wants to have kids. She also wants to change careers and has written a children’s book.

Tom starts an affair, and Elaine walks out on Tobey, and takes up with a German artist. Elaine also is hit on by a female publishing executive. Meanwhile, Rebecca is constantly being hit on by a younger actor who is infatuated.

Are you asleep yet? ‘Trust the Man,’ is a simplistic movie which mistakes quirk for humor. It’s a fatal misstep, because the audience doesn’t care about these characters because they’re too ridiculous. Tobey won’t talk with his girlfriend so that he can watch ‘Sportscenter?’ Tom goes to a sex addict meeting where everyone’s kink is so strange, he tells them that he likes to have sex with lunch meat and no one bats an eye. Ha ho.

Early on in the movie, Tom and Rebecca make their yearly trek to see a therapist. Why? Because it’s unique and quirky. Not because it has anything to do with the story. Why is Tobey stalk his therapist? I don’t know. It doesn’t make any sense.

The cast, consisting of Julianne Moore, (the director’s wife,) David Duchovny, Billy Crudup and Maggie Gyllenhall are all good actors, and they do well with what they’re given, but the problem is what they’re given.

When this movie was released to theaters, many people compared it to the films of Woody Allen. While it has shade’s of Allen’s style, it is a clear example of how Woody Allen’s movies only look simple. If Woody Allen is the deep end of the pool, ‘Trust the Man,’ is only ankle-deep. -Sam