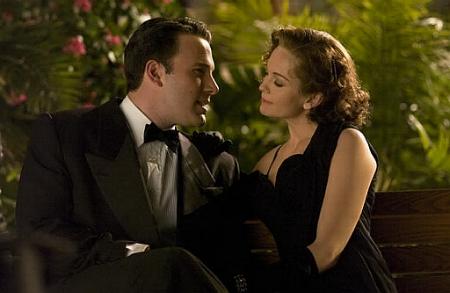 What killed ‘Superman’ actor George Reeves? A jealous lover? Himself? Was he depressed over his failing acting career? These questions are at the heart of Allan Coulter’s movie ‘Hollywoodland.’

The story takes place at two different times- the first one opens, at the beginning of the end of Reeves’ career. Played by Ben Affleck, Reeves meets Toni Mannix, (as played by Diane Lane,) the wife of a studio head. They begin a torrid love affair, with Mannix going as far as to buy Reeves a house. Meanwhile, the day after Reeves’ suicide, two-bit private detective Louis Simo (played by Adrien Brody) sets out to find out what really happened.

Simo thinks that there are too many odd occurrences surrounding the suicide for it to appear that neat and pat. Why did the three people downstairs in the house where Reeves killed himself wait almost an hour before calling the police? Why were there strange bruises on Reeves’ body? What about the two bullet holes in the floor? While investigating the case, Simo also gets a glimpse into what Reeves meant to people, as his young son rebels, upset that his idol has taken the easy way out.

Meanwhile, we see Reeves as he struggles, first landing ‘Superman,’ and then wanting any job but ‘Superman.’ His role in ‘From Here to Eternity’ is cut down after test audience laugh through his scenes. Meanwhile, as Reeves grows frustrated with his success, Toni becomes upset that Reeves is taking up with another girl, one who is single.

‘Hollywoodland,’ drops us into the world of 1959 Los Angeles and does an excellent job of keeping us there. While the story isn’t the greatest, it’s the atmosphere and the tension that Coulter creates that keeps you interested. Ben Affleck is surprisingly good in his turn as Reeves. In fact, he’s good enough here that you forget ‘Changing Lanes,’ ‘Paycheck,’ and ‘Daredevil.’ Diane Lane and Adrien Brody also handle themselves quite well in supporting roles. Brody is one of those actors who seems to grow on you, with each successive film, you find yourself admiring his work more and more. This admiration grows leaps and bounds with this film.

As with Brian DePalma’s ‘The Black Dahlia,’ there are historical inaccuracies. The legend of a child pointed a loaded gun at Superman is just that- legend. And ‘Eternity,’ director Fred Zimmerman has said that in actuality, Reeves’ role was never cut, and there were never any test screenings.

But the reason to see this movie is not for it’s stick-to-the-truthiness, it’s for the performances and the atmosphere. Much like ‘Black Dahlia,’ ‘Hollywoodland’ is a re-imagining of a true event. In fact, it pains me to keep comparing it to ‘Dahlia.’ Other than the fact that they are based on true-life events, these movies have nothing in common. ‘Hollywoodland,’ for example, is really good. In the battle between Hollywood movies based on true stories, ‘Hollywoodland’ wins in landslide. -Sam