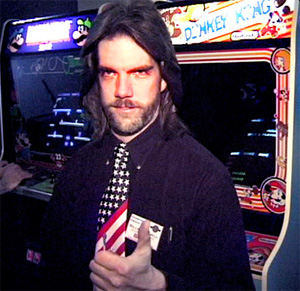 For most of his life, Steve Wiebe was an also-ran. At pivotal moments in his life, be it on a baseball mound, or with playing with his band, when the chips were down, you could count on Steve to not deliver. So, after losing his job, Steve decided that he was going to break the high score record for Donkey Kong.

And he did. And what happened afterwards is the subject of Seth Gordon’s documentary, ‘The King of Kong: A Fistfull of Quarters.’ It is a fascinating, entertaining movie that draws you in slowly but very surely. The power struggle between those that make the records and those that enforce the records is a struggle in the same vein as ‘The Godfather,’ or ‘There Will Be Blood.’

Steve’s big challenger in the Donkey Kong racket is Billy Mitchell, a born winner if there ever was one. Billy lives his life with the mantra that if there’s something worth doing, there’s something worth being the best at. A successful video game player, a successful businessman, Billy seems to have made the transition from video games to other aspects of life in ways that many of the periphery characters in ‘Kong’ haven’t seemed to. Billy is confident, to a point of almost being cocky about his achievements. Steve just wants to be good at something. It is this battle that makes this movie so entertaining.

Frankly, I’m a little disappointed that I saw this movie only now. ‘Kong’ is the kind of movie that would play even better with a group of friends or a large theater filled with people. This is clearly one of the best movies of 2007, hands down.

You may think you don’t like video games. You may think it’s only for nerds who live in their mother’s basements. However, ‘Kong’ shows you that perhaps, there’s a little more going on here than you would first believe. I cannot recommend this movie highly enough. Check it out. -Sam

One thought on “DVD Review: The King of Kong”