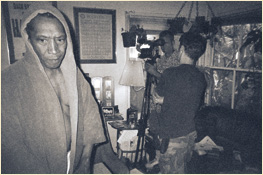 Produced by two Boston locals, Eric Poydar and Brett Portanova. The two met as PA’s on David Mamet’s “State and Main,” and have worked together ever since. While they were looking for actors for their feature “4Vienna.” They met with the late Lionel Mark Smith (who’d appeared in countless Mamet films over the years), and out of that meeting came the inspiration for “Larry (the Actor).”

The duo worked with Smith to develop a character that was based off of his thirty years of experience in the business. The week long shoot in 2005 transpired into a film about an actor, leaving his last audition, if he doesn’t get the part, he’s leaving and going back to Chicago.

The premise, and the way the story came about is very intriguing. It is no doubt a special story that I definitely don’t want to miss.

Larry (the Actor) will be screening at the Independent Film Festival of Boston April 25th at 6:30pm, and April 26th at 5:00pm at the Somerville Theater.