Having established their style and become a cohesive writing and performing group with the first few seasons of Monty Python’s Flying Circus and their first feature film, ‘And Now For Something Completely Different,’ Monty Python set out to break new ground for themselves as a comedy troupe: a feature length film of completely original material. Where ‘And Now For Something Completely Different’ was a collection of sketches from the Flying Circus series, the troupe buckled down to take on a single topic and sustain it for the length of an entire feature. They appointed Pythons Terry Gilliam and Terry Jones as co-directors of the film and chose the topic of King Arthur’s quest for the Holy Grail as the story for the picture. The result was 1975’s ‘Monty Python and the Holy Grail.’

In looking at the progression of the Python’s, the use of Arthurian legend as the focal point of the film’s story was an excellent decision on the part of the sextet. Having come from the television series where the stories they were telling only needed to sustain themselves for the 2 to 5 minutes until the next sketch started, the use of the various King Arthur stories as a basis for the film 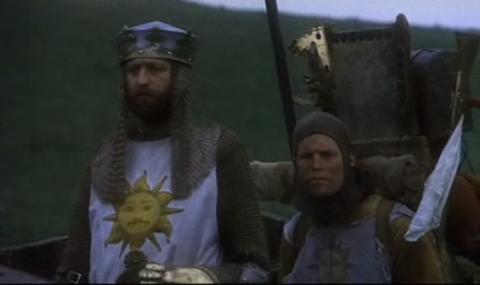 lent itself to a natural evolution for the comedy set. Having one central character move from story to story on his quest could easily translate for Monty Python. They cast Graham Chapman as King Arthur, the film’s main character, and followed him horselessly travel across the land, questing for the mythical Holy Grail. Along the way, King Arthur, with his faithful sidekick Patsy (portrayed by co-director Terry Gilliam, clopping two coconut halves together to make the sound of horses’ hooves), meets an eclectic set of characters that have since become iconic in comedy film. Some of the characters and stories are pulled and lampooned directly from Arthurian legend, such as my personal favorite scene from the film where King Arthur is trying to explain to the peasants that he meets how has become King. While the two peasants slop mud on a hillside, noting that they don’t remember voting for Arthur, the King tells the story of how Excalibur was presented to him by the Lady of the , anointing him King of England:

King Arthur: The Lady of the , her arm clad in the purest shimmering samite held aloft Excalibur from the bosom of the water, signifying by divine province that I, Arthur, was to carry Excalibur. That is why I am your King.

Peasant: Listen, strange women lying in ponds distributing swords is no basis for a system of government. Supreme executive power derives from a mandate from the masses, not some farcical aquatic ceremony. Oh, but you can’t expect to wield supreme executive power just because some watery tart threw a sword at you.

Other characters and scenes draw from mythology in general, as the film follows King Arthur in a story that mirrors an archetypical mythological tale. Arthur’s quest puts him in front of characters and situations that test his mettle as a leader, but, true to Python form, skewers it to point out the absurdity of the stories, but still showing reverence for the source material. Arthur is tested by situations such as

the Black Knight, who guards the bridge to cross what can only be loosely described as a small stream and tests King Arthur’s strength. Limb after limb is lost by the Black Knight, but he fights on, oblivious to the fact that his arms, then legs, are cut off, until Arthur just scoots by the now stump of the knight. Or when Arthur’s intelligence is tested by the bridge keeper, who only allows those who can answer his three questions to cross the bridge. All of the situations Monty Python uses in the film show a great understanding and appreciation for mythology, creating gags and dialogue that work if you are unfamiliar with mythology (or Arthurian legend) and just want a laugh as well as providing mythological inside jokes for those who are versed in such texts.

As with the television show, each member of Monty Python (Chapman aside, as he basically remained King Arthur through the film) played members of the Knights of the Round Table and then various other roles throughout the film to fill out the cast. The film is surprisingly cohesive for a group that is used to writing random skits that usually don’t thematically flow from one to the next (see the Kids in the Hall’s film attempt, ‘Brain Candy,’ to see a less successful venture into features by a comedy troupe) and while it’s not as great of a film as Monty Python’s next outing, ‘Monty Python’s Life of Brian,’ ‘Holy Grail’ has many more laughs packed into the hour and a half and presents such a smart edge to it, elevating it above a spoof of the King Arthur stories, that is a must see for anyone who appreciates that this kind of comedy can be more than just ‘Meet the Spartans.’