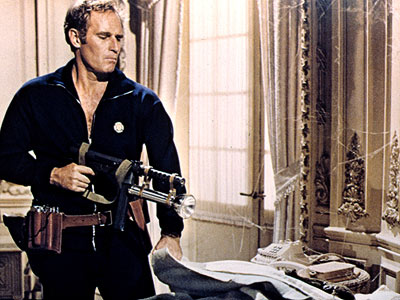 Say what you will about Charlton Heston’s politics, he was a great actor. When Chuck took the screen, you couldn’t take your eyes off the guy. So, it was sad news to hear that he had died. There will never be another Heston. Mostly because nature will never manufacture a jaw like that again. Onto the list.

The Omega Man
You ever ask a girl out and she says, ‘only if you were the last man on earth?’ Ladies, meet Chuck. Based on Richard Matheson’s novel, (and re-made with Will Smith in 2007 under the original title, ‘I Am Legend,’) ‘The Omega Man’ is about the last man standing.

The movie opens a few years after a biological war between China and Russia kills off almost all of earth’s inhabitants. However, Charlton Heston’s genes were strong enough to survive. Heston plays Robert Neville. Neville is an Army Colonel, who lives on the top floor of an apartment building, fortified to keep out the zombies that roam the streets. Heston eventually meets up with other non-zombies and they form a sort-of support group.

While it’s not a perfect movie, I have a soft spot in my heart for 1970s sci-fi. It’s not wonderful, but it’s fun.

Planet of the Apes
I mean the original. What can be said about this movie that hasn’t already been said before? Probably nothing.

I’m not nuts about this film, but am recommending it because it has its moments. The original ‘Planet of the Apes,’ is one of those movies that a lot of people reference, but have never seen. The later films and TV series don’t really do it for me, but this one works.

Fun fact: this movie won an Oscar for best make-up, beating ‘2001.’ Stanley Kubrick always lamented that he made his apes look too realistic.

The Three Musketeers/ The Four Musketeers
Based on Alexander DuMas’ popular book, these films, directed by Richard Lester, are both perfect if you’re looking for a night of swashbuckling. (And who isn’t, really?)

Heston plays Cardinal Richelieu, who’s terrible and nasty and wicked. And clearly, Chuck’s enjoying playing the baddie. These movies, (if you don’t know the story behind the making of these movies, look it up- it’s fascinating and way too complicated to explain here.) The 1970s were a great time for cool action movies, and these are some of the best. That’s all I can really say about them- check them out. They’re fun. -Sam