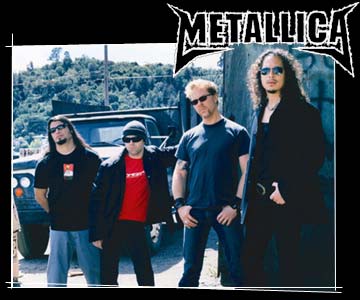 My flame for Metallica has dwindled over the past few years, largely in thanks to their lackluster album, St. Anger, which, despite reviews saying it was a return to form for the fellas, was actually kind of crappy. The only good thing that really came out of the St. Anger sessions was an amazing documentary, ‘Some Kind of Monster,’ following Metallica through the loss of their bassist and the events through recording of the album. Their tour to support the album featured only two songs from the album, seemingly implying that they too understood that lackluster event that was St. Anger. Then things went quiet on the Metallica front until it was announced in 2006 that the boys were back in the studio to begin work on their next album.

Well, here it is, 2008, and Metallica are theoretically close to finishing the yet untitled album (being produced by super-producer Rick Rubin). But the flags of “it’s a return to form for the fellas” are being waved again with this album. And with the band constantly leaving the studio to do shows, my spider-sense is tingling, giving me that ooky vibe that Metallica is nervous and that this album is not going to be the end cat’s meow as all of us Master of Puppets fans are hoping it will be.

This is all a very long-winded way of announcing a new piece of news on the Metallica front. The band has created a new webpage titled Mission: Metallica. The page is currently sparse, but it touts the following piece of information: “Experience the album…before it’s done.” Apparently the site will go live some time in May and all it takes is your e-mail address to get things rolling. Why my long intro to give this little piece of news? This kind of gets my “uh-oh” receptors going. I’m excited at the prospect of finally hearing the new music, but I’m almost getting the sense that they band is looking for the fan’s reaction so they can pull the cord on any disasters that may be coming. Hopefully I’m wrong and I’ll be completely blown away by what I hear, as I am totally going to be giving up my e-mail address to this site, but I’m not getting that warm and fuzzy feeling about this one.

Your mission, should you choose to accept it, is to check out the site here!