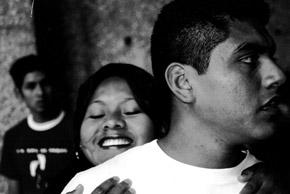 Carnivalesque Film’s personal and intimate documentary film ‘Intimidad’ tells a Mexican love story in a new and original way. Cecy and Camilo – ages 21 – recently moved to the border, Reynosa, Mexico, from Santa Maria, Puebla with a dream to save money, buy land, and build a home. A year later they return to their rural hometown to reunite with their 2 year old daughter. What seems like a satisfying reunion turns into a confusing dilemma that transforms the course of their marriage. ‘Intimidad’ was filmed over the course of 5 years and mixes digital verite with Super 8 and 16mm film stock.Carnivalesque Films, founded in 2005 by David Redmon and Ashley Sabin, is a documentary production and distribution company located in Mansfield, TX. Carnivalesque Films explores how personal stories relate to complex social issues. Redmon and Sabins previous film ‘Mardi Gras: Made in China’ premiered at Sundance 2005, ‘Kamp Katrina’ premiered at SXSW in 2007.