‘Them’ (or ‘Ils,’ for you foreign film purists) does very little to set up its horror story, a fact that is backed up by the 77-minute run time, but that’s what makes this film work. Much like the tormented main characters, Clementine and Lucas, we the audience are just thrown into the plot and the situation without anything to grab onto for an explanation as to why all of this is happening. And the result is a pretty much gore-less, incredibly intense hour and change that goes on to support my theory that horror films may be undergoing a French revolution. Take note, : you may want to shift your attention from remaking and ripping off Japanese horror films and start looking towards .

There are really only two characters in this entire film. They are portrayed by Olivia Bonamy and Michael Cohen, who do an amazing job of taking us through the horror and torment of having strangers just appear at your house to play with you. The first half of the movie takes place inside their house as they try to escape, hide, and find out what’s going on, all while being stalked and 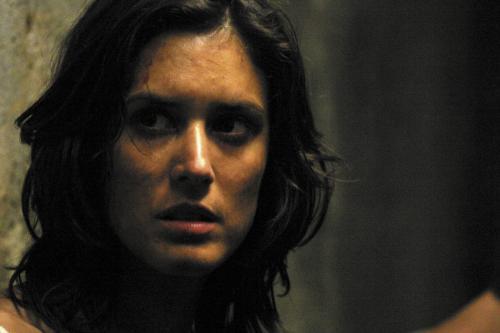 having their hand forced as to which direction they head in for safety. As an aside, who the hell lives in a remote house that is in the middle of the woods and looks like it could have once been an institution for the mentally insane?! The house is huge and elaborate and perfect for stalking and hiding and the intruders do just that. In fact, our glimpses of them are so rare that the tension keeps building and building with each final payoff worth the crawling up the couch in discomfort as you watch.

The second half of the film takes place during the escape from their home/Bellevue and leads them right into the woods. Damn. We get the standard horror fare of splitting up, falling, peering around trees, etc. But the filmmakers do such an excellent job of keeping you on edge that you don’t have time to think about the fact that you’ve seen this situation and all of these tricks before. Instead, I found myself watching and wondering if and how they were going to escape.

The film’s short running time is perfect as ‘Them’ is all about the situation and the moment. The intensity builds and crescendos with little exposition as to whys and hows lesser movies would throw in because they thought they had to. In fact, my only qualm with the film was the very ending when the filmmakers decided to step away from their “no exposition” rule and provided a kind of wrap up text. There were about three lines of follow up that, to me, seem wholly unnecessary, almost thrown in just to offer some sort of explanation. But the half-hearted text really only dumbed down the events for me, especially the final line of text which came across as a throw-away line from a later Chucky movie. I think leaving off the text over the final shot would have made the movie a great film. But as is, it stands as a great but minor-ly flawed horror film. While it’s a defined genre film, it plays within that genre very, very well. Definitely worth the watch.