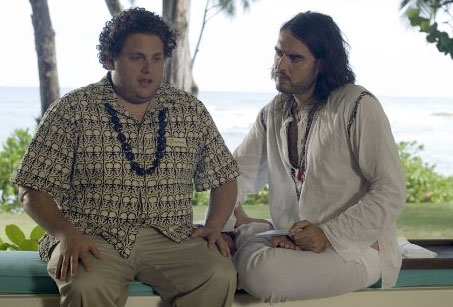 Judd Apatow is one of my favorite producers working in Hollywood today. Whether he’s directing or producing, any movie that has his touch has a high probability of having a good time.

Reteaming with ‘Forgetting Sarah Marshall’ helmer Nick Stoller, Apatow will be producing ‘Get Him to the Greek’ with Jonah Hill and Russell Brand.

Jonah Hill stars as a recent college grad insurance adjuster, whose hired to accompany Russel Brand, an out-of-control rock star from London to a gig at L.A.’s Greek Theater.

Stoller cited his desire to get the two actors back together again after displaying great chemistry on the set of ‘Forgetting Sarah Marshall.’

Stoller describes ‘Get Him to the Greek’ as a dirty ‘Almost Famous.’ Stoller is currently co-writing ‘Five-Year Engagement’ and developing the new Muppet Movie with Jason Segal.