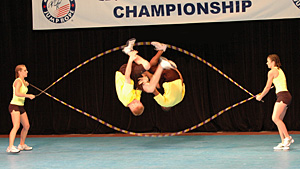 JUMP! is an award-winning, rousing and fast-paced documentary about competitive jump rope, JUMP! follows five teams  from around the United States who push their physical and psychological limits in pursuit of winning the World Rope Skipping Championship.

The sport is part extreme athletics, part art form and the kids create masterfully choreographed moves that burst with rhythm, sweat and originality. Throughout drilling and mind-boggling performances, these unexpected trailblazers reveal what makes them tick and what sets each of them apart.  In the end, determination, rivalry and collaboration converge with dramatic and unexpected results.

The family friendly film originally premiered at the Los Angeles Film Festival in 2007. There will be free interactive Jump-rope demonstrations before and after each screening at IFFBoston.