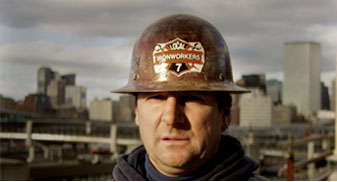 ‘The Greening of Southie’ goes behind the scenes and onto the scaffolds to follow the construction of Boston’s first green residential structure, a luxury condominium complex called the Macallan Building. Located in the city’s storied working-class neighborhood, South Boston, Macallan was conceived with the ambitious goal of securing a LEED Gold rating from the U.S. Green Building Council. Moving between the idealistic young development team, distant suppliers, and the salty union construction crew, The Greening of Southie maps each step––and misstep––on the road to move-in day. Featuring the music of Force Theory (Manda Bala, Jesus Camp, Favela Rising), and the filmmaking of the creators of King Corn.

‘The Greening of Southie’ will be screening at the Independent Film Festival of Boston, Saturday, April 26, at 1:00pm (Somerville) and Sunday, April 27, 11:30am (Coolidge).