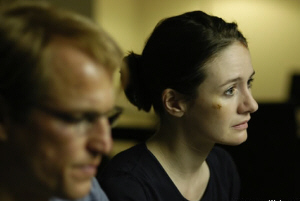 The Independent Film Festival of Boston kicked off with a bang this evening with the East Coast premiere of Brad Anderson’s ‘Transsiberian,’ a thriller set during a journey between China and Moscow.

The film opens with Ilya Grinko (Sir Ben Kingsley) investigating a narcotics related murder somewhere in Eastern Russia. We then meet Roy (Woody Harrelson) and Jessie (Emily Mortimer), American tourists in China for volunteer efforts. They decide to travel to Moscow via the Transsiberian railway, rather then just flying. The couple run into a mysterious couple, Carlos (Eduardo Noriega), and Abby (Kate Mara) who is American like Jessie and Roy.

Carlos clearly shows his interest in Jessie, sharing some of the secrets he is carrying, it becomes clear that Abby and Carlos may not be exactly what they seem to be. The trip turns from a casual tour through Asia, to a dangerous journey.

The Hitchcock influence is all over this film, from the everyman protagonaists, the international mystery, even the ominious music with piercing violins. A special kudos to Alfonso Vilallonga. Anderson and writer Will Conroy cited influence from Dostoevsky, which was clear in some of the conversations between train passengers on the Gulags that were found in Siberia during the time of the USSR.

The only other film I’ve seen of Anderson’s is Session 9, and I must admit, the atmosphere was definitely here. Sir Kingsley’s 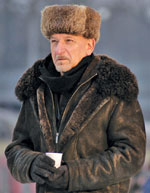 performance was expectedly stellar, and his Russian extremely convincing. When asked about it at the screening, Kingsley explained that he had an excellent Russian teacher, who during takes would tell him his lines in Russian, and Kingsley would repeat them verbatim.

The core of the film though is Emily Mortimer, whose character was very interesting. There is a conflict within the audience to cheer her, yet question her intentions.

The cinematography was gorgeous and locations convincing. Transsiberian was shot primarily in Lithuania (as Russia proved to be too expensive a location). The pacing of the editing was far superior to ‘Session 9.’

Overall, I found the film to be entertaining, save for some things I feel that they needed to expand on towards the end (none of which I can explain without spoiling the film). The information is there, but there needs to be more of an effort to make certain details clearer to the audience earlier in the finale.

The film has been picked up by First Look Studios, who are aiming for a late Summer domestic release.