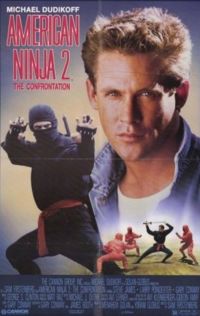 American Ninja 2: The Confrontation is 100% pure uncut 80’s awesome, plain and simple. You can just feel it right from the opening sequence of the movie, when we see several guys screaming along a windy road on their motorcycles—not just any motorcycles mind you—Ninjas! That sets the tone right then and there, because from that point on you’ve got some sweet ninja action heading your way.

Plotwise, we start out with a group of marines stationed in a tropical locale, who see their ranks thinning by way of “mysterious” abductions. Enter: two army rangers—Joe Armstrong (Michael Dudikoff) and Curtis Jackson (Steve James), brought in to investigate the situation, and it doesn’t take them long to get into the thick of things during an ill fated speed boat ride with the marines (this is actually a pretty good life lesson in general here-never trust a group of marines on a booze cruise in a speed boat, because in all likelihood, one of them is a spy working with ninjas to sabotage the boat an abduct you). One thing that the ninjas didn’t count on though—Joe was one of the Americans on that boat—and he’s a ninja…..an American Ninja! The ninjas proceed to get their collective asses handed to them.

I won’t ruin the rest of the “Plot” for you, but suffice it to say the remainder of the movie involves a corrupt evil business man named “the lion”, his hired mercenary super badass head ninja (with an eyepatch, if I remember correctly!), and their plans to create an unstoppable army of genetically modified super ninja. Oh and Joe has a sidekick named Todo for part of the movie (this isn’t really that important, but I had to say something mundane in this sentence so your brain could fully process how awesome the last sentence was). Enough said!

American Ninja 2 makes me smile every time, as it offers what I consider some of the best of that seemingly long gone “super action” genre that the 80’s specialized in; unwieldy guns (most of which seem to have grenade launchers on them because it looks cool), gratuitous explosions, and martial arts fights where the bad guy grunts frequently seem to more or less just stand there practically waiting to get hit. Nowadays everything has to be either realistic and grounded, or fantastical and way over the top with a ton of CG effects, hardly ever hitting that sweet spot in between. So my advice is this—grab a beer, kick back, pop in the dvd (or turn on the TV to FOX or UPN at about 1pm on any given Saturday—it’s naturally occurring cable habitat) and rediscover that tiny forgotten part of your brain that craves “super action”—you’ll be so happy you did!

One thought on “DVD Review: American Ninja 2 “The Confrontation””