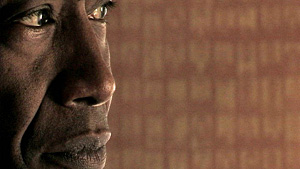 It’s rare to see a film with a single star. Its difficult enough to tell a story that engages a whole audience, especially as the the attention span of audiences become shorter and shorter. ‘Larry (the actor)’ is brave in that you spend the entire 35 minute run time with Larry, an actor with a career spanning 30 years. The film is a lengthy monologue, starting with Larry leaving an audition for a cowboy film.

Larry has finally grown tired of the town that plagues on the hopes and dreams of those who inhabit it. He gives them until Friday. If he doesn’t hear from them. He’s packing his bags, getting on a plane and heading back to Chicago.

The character of Larry was inspired by the man who embodies him, veteran actor Lionel Mark Smith. Director Eric Poydar, and co-writer/producer Brett Portanova developed this project together with Smith. Having approached him with another feature they were planning, they both realized how much he had to say and give, that he completely deserved his own starring role.

The film feels very organic, and very natural, the performance very real. Watching it, I found myself asking, now wait, was this improvised? How much of this was written? Portanova told me that almost all of it was written, with little liberties here and there by Smith.

The editing by Poydar was excellent, with good uses of on and off camera dialogue, split screens. The cutting and music, highlighted the emotional peaks of the short effectively.

The two filmmakers are very much about bringing the spotlight of the industry to the city of Boston and state of MA, this is a great piece from the pair, and I’ve got high expectations for these guys.