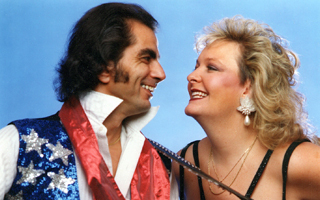 “This is what it’s like if you live the dream.”- Mike Sardina

Lighting & Thunder are a performing duo in Milwaukee, Wisconsin and if you want to see, hear and experience the music of Neil Diamond and Patsy Cline, you can do no better than to see them play.

‘Song Sung Blue,’ is a documentary about Mike and Claire Sardina, better known to their fans as Lightning and Thunder. As the movie opens, the Sardina’s are in a bit of a tough spot. A car crashed through the front window of their home, seriously injuring Thunder badly enough that her left leg needed to be amputated just below the knee. Meanwhile, Lightning is continuing to have heart trouble. He’s trying to do better. He’s quit drinking and is trying to eat better, but can’t (or refuses to) give up coffee and cigarettes.

Back home, they’re having a rough time with their kids. Clearly the kids like and respect Lightning as a stepfather, but they’re teenagers and rebelling and nothing he’s going to say is going to stop it. So he stops saying much of anything to them. Thunder is still trying and screaming matches result, sometimes with even Lightning getting involved.

Their career is going through a rough patch. However, Lightning is undaunted. They’re performers. That’s what they do: perform. Thunder suggests that perhaps he should consider taking a work-at-home computer job, but Lightning insists that their big break is around the corner.

‘Song Sung Blue,’ is a simple and highly effective movie. The follows Lightning and Thunder as they wait for their next big break, (a return performance at the State Fair where they met, or a friendship with Pearl Jam’s Eddie Vedder perhaps,) and try to live their lives as best they can.

There are setbacks. Thunder needs a new prosthetic leg, which is costly. Lightning’s lifestyle is catching up with him. But they continue on because that’s what performers do. Friends and family repeat that, even though things aren’t going great, what both Lightning and Thunder still have are their voices.

At first blush, the movie seems like it could be a kind of joke, something making fun of celebrity impersonators, however, director Greg Kohs digs deeper and, by the end of the film, you find your emotions on the edge. Kohs does a masterful job of pulling you into the story and into the lives of Lightning and Thunder.

Both Lightning and Thunder are fascinating characters to watch and learn about. They are so committed to their dream that nothing will stop them. Thunder often refers to herself in the third person. Perhaps its because she’s trying to convince herself. Lightning doesn’t need convincing. He knows it’s going to happen.

‘Song Sung Blue,’ is a funny, moving and touching story of a family and what they go through. Even the movie’s concept, ‘what’s it like being Milwaukee’s best-known Neil Diamond and Patsy Cline impersonators,’ seems like a joke, the movie is an expertly made and crafted tale of an American dream- Sam