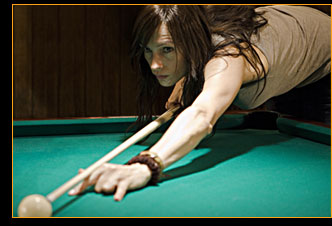 Kailey is a pool hustler, trying to sort out her life and rescue her son from a rough life with her ex-husband. Sounds like a rough one to sit through, no? Sounds like it’s going to be filled with depressing characters who can’t catch a break, yes? Surprisingly and wonderfully enough, that is nowhere near what ‘Turn the River,’ is like.

Directed by actor Chris Eigman, (best known for his work with Whit Stilman and Noah Baumbach, ‘Turn the River,’ is his directorial debut. And it’s good.

Famke Janssen stars as Kailey, a woman who is continually looking for the break she so desperately needs. She’s taking suckers at both poker and pool, but can’t seem to get ahead. She’s sending letters to her son, Gulley, who knows to swing by a Manhattan pool hall to pick them up, lest his father, an ex-seminarian and a bit of a dictator around the house, find out. Gulley’s father, played by Matt Ross, (TV’s ‘Big Love,’) is still wrestling with the concept that he’s abandoned his religion, and his mother doesn’t let him forget it. Kailey decides that enough is enough and she’s going to get Gulley out of the situation that she was forced to put him into. Rip Torn plays the crusty pool hall owner Quinn. He tries to help Kailey out, but is somehow able to avoid falling into the role of overprotective father.

‘Turn the River,’ is clearly a personal, hand-made project. Eigman presents and shoots all his characters with such affection; one clearly senses that while they may be flawed, the director loves them all. And the acting is also top-notch. Janssen plays Kailey as a woman torn over what the right thing to do is, but also imbibes the character with a soul, so you are never feeling like you’re watching a woman on a straight track, heading inevitably to a conclusion. There is meat on the bones of these characters. They talk of things that we don’t see. They allude to things. You feel dropped into their world.

The pace is on the slow side, but it works perfectly. While it’s never a movie that will play to a multi-plex crowd, it’s is a thoughtful and wonderfully moving about characters at a crossroads. And how and why they make the decision to go down the road is definitely worth the journey. -Sam

After the screening at the IFFBoston, director Chris Eigman and actress Famke Janssen spoke and took questions from the audience. 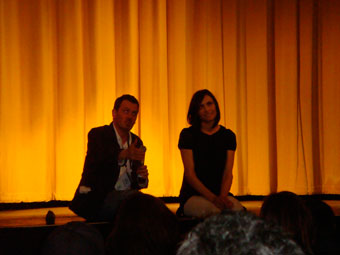